A Journey of Faustian Proportions

Friday was filled with unexpected moments; I managed to crush a deadline at work before it could me, I bumped into a really good little jazz combo at a restaurant I was expecting to be a quiet little place, enjoyed interesting conversation with a single serving friend and successfully stifled laughter that might have seen me expelled from the opera house.

My friend Deborah and I went to see the Canadian Opera Company's production of Faust. When we arrived, an elderly gentleman had his cane resting on my seat. He moved it so I could sit down and held it in his hands. I told him if he wanted to rest it between our seats, he was welcome to and he said he'd be fine and didn't want to forget it when he left. A couple more moments of settling in and the show began.

Faust, as an old man, sits centre stage, clutching a cane singing about how life has trapped him, and how he'd give anything to be young again. Considering the gentleman next to me, this seemed a lot like art imitating life. The beauty of David Pomeroy's vocal performance in the title role though quickly drew me away from those thoughts and deeper into the story. Faust trades his soul for a return to youth and the promise of love by striking a deal with Mephistopheles. You know this is disaster.

A lot of the grandeur I enjoy about opera was on display with some excellently performed scenes, a standout being the festival complete with fireblowers, acrobats and a huge Mother Earth puppet. 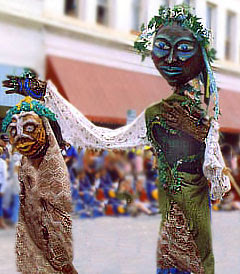 Photo of Me and Deborah an Earth Mother Puppet

There were some bits of awkward staging, some minor scenery glitches and a missed lighting cue or two but I seem to be the only person that is annoyed by these things.

At intermission, I stood in the cold with Deborah while she smoked and I talked about smoking.
When she decided it was time to go and powder her wig, I returned to my seat. I asked the old gentleman what he thought of the production and he became quite animated.
I'm completely tone deaf you know!!; I'm only here to look at the sets and the lighting; don't you think that last bit with all the flowers was ridiculous? You do know that flowers don't typically all grow at the same height?

We shared a few laughs at some of the more ridiculous conceits of the production and I asked if he worked in theatre. He said no, I just like approaching staging and lighting from an intellectual standpoint and figuring out what I would do differently. I told him that I was here first for the music and singing and he said that together, we'd make one hell of an opera goer.

On the new opera house, he said I loathe it! It's so Canadian, could it be any more boring than this? I had to agree that it was a bit beige for my liking although much better acoustically than the previous venue. Before the curtain went back up, he managed commentary on the way people dress when going to the opera these days along complete with a 'we used to dress just to get on an airplane' tag which I found charming.

In the second act, there a few more technical glitches and at one point a minor character wearing a brace and using crutches tripped on the edge of the set and nearly pitched over. It was as unintended as the urge I had to burst out laughing. I clamped my hand over my mouth and kept it there while my stomach tensed to suppress the urge.
I enjoyed losing myself for a few hours in things I love to do. And the two vocal performances I enjoyed most happened to be by Canadians. Perhaps someone is conciously trying to paint in colours meant to offset all that beige?

It struck me a short while later that the old man I'd talked to was an older version of me. I was pleased to see that I wouldn't be begging the devil for a return to youth but rather would be still relishing in the opportunity for an occasional curmudgeonly outburst.

I just hope I do it with the same twinkle in my eye.
Posted by Dale at 1:18 AM

I hope I'm not a single serving friend. I preserve well and am great as leftovers, FYI. (Some might say sloppy seconds....)

I would agree with your old friend about today's lack of sartorial grace. I'm always up on a soapbox at work about that. AT WORK! At least there isn't someone paying for these slobs to be on the airplane.

There is still hope for you!! You did understand all that even if it was in french???
I'll have to do that Opera thing sometime in my life(doubt that I appreciate it!!)
And that should have been scary, Dale and an older version of Dale in the same place, side-by-side!!

The old man sounds like a great seat companion. And don't feel bad about almost laughing, I'm sure you weren't the only one.

How many shows do you have left?

Gotta love someone who can not only appreciate schadenfreude (hey crip, watch out for that stage), but has also met and conversed with future Dale. Makes me all warm and fuzzy and hopeful for the future of humankind.

And future Dale should see what they are wearing to puppet shows these days. Sheesh!

Listen CP, I broke up with you as soon as I heard you ask the stewardess for that second pillow. I'm the same as you and the other old guy on the clothing issue. People hate me for it. You're old.

Jill, most opera companies use subtitles or in this case surtitles because they're above the stage. They make it much easier to understand what's being sung. It's a Canadian invention by the way. Oh, and I'm never frightened because I'm my biggest fan.

He was hilarious Chelene, we had a good chat actually. The row I sit in has an odd number of seats so often, there's an odd person out so to speak. There are 4 more I think? Another one in a couple of weeks actually.

I was going to upload the song Schadenfreude from Avenue Q Barbara but mydatabus was giving me a hard time. It's disgraceful, have you seen what they've got on?!

Hah! I love an old-timey crip! And to know it was the future you gives me warm fuzzies. I hope to be able to kick that cane out from you when the time comes.

I never knew that term 'single serving friend', but it's tasty and excellent; I thank you once again for expanding my horizons.

What?? I can't believe it, I've learn something from you, Dale!! And I know that we were smart!!
I still think it would distract me from the action on stage, like subtittle in movies!!

Daley, why does your life always sound so much more interesting than mine? Hmph.

I totally agree with you and future Dale about the clothing issue. I hate the lack of decorum shown in dress at places like nice restaurants and the theater. If it makes you feel better or less cranky/old, my youngest daughter is the same way--i think she'd be happy with a return to early 1900's clothing.

The opera sounds wonderful. And if you can't laugh at a gimp falling in public, on stage, what CAN you laugh at?

Sounds like a great seat companion. I love how he went primarily for the sets and lighting. I imagine I would have laughed at the slip-up on stage too, then again, I'm one of those horrible people who laughed when the guy hit the propeller in Titanic.

I eventually want to be one of those old men at the end of The Muppet Show, heckling everything.

Conceit. Damn man, I haven't seen that word used in that context in ages!

Is this birthday thing a secret? I won't tell anybody. Happy Birthday

Your account of your evening at the opera is so utterly glorious, sweet, fascinating, charming, amusing, and well executed that I just can't seem to find anything about which to criticize you or it.

Why are you doing this to me, Dale? Why?

Im sure you will have that same twinkle in your eye Dale :O)

A delightful little bit. Loved your description and the old man's take on the opera. Sounds Canadian. :)

(1) I take it you'll never see Deborah again because she smokes? I would reckon that if she likes opera she might at worst be a double-serving friend.

(2) If I were you, I'd listen to the old man very carefully. He could probably provide you with a wealth of tips for your future life as a crumudgeon.

(3) Your comment about the opera house reminded me of Mike Meyer's comparison of Canada to celery.

Great post Dale. I like the notion of the single serving friend and the way the rapport with the old man with the cane next to you tied back into the plot of Faust itself.

I was going to see Faust when it's here, but now I'm no so sure. You hardly mentioned the music and that's not my type of opera.

I second Old Lady. How's that for being discreet? Hope you'll still have the blog when you become him, Dale. If you do, I'll still be coming around.

There may be a point on the end of my cane so kick carefully Tanya!

I'm drowning in waves of boredom most of the time Reese so don't despair.

You are clearly parent of the millenium Bubs for raising such a sensible child. My favourite part of the overrated There's Something About Mary was when the guy with the braces dropped his keys and tried to pick them up.

Nothing like a good unfortunate accident to set the inappropriate laughter in motion is there Allison? It's not the first time at the opera that I've been stricken.

I'd love to be the other one Mob, only more lifelike. I forgot about them!

Isn't is a great word Old Lady? And thank you for the kind wishes. I'm sure I have no idea what you're talking about.

Because I can Zed. Simple as that.

Thanks Mel, or if not a twinkle a cataract that catches the light just so.

Very Canadian Larry H. I couldn't have it any other way.

I have to take her so I can walk into her cloud of smoke X. Dell. I do believe I learned several valuable things from the old guy too. We had quite a good conversation. Mike Myers, funny you should mention him. I was thinking about him for other reasons and will blog about it soon perhaps.

Thank you Chancelucky, glad you liked it. I don't think I've fully captured his spirit but he certainly did enhance the evening enjoyment.

I do tend to review everything but the actual thing I've gone for Justacoolcat but rest assured the music was good. There was a lot going on though and some stylistic schizophrenia I thought, not necessarily bad, just perhaps not so flowing. There were raucous pieces, parts for the chorus, very tender moments and then crash bang boom, another tempo change. Still, interesting and a couple of familiar passages too. Try here for a listen: Faust Excerpts

You're a schweetheart just like Old Lady Geeti. Thanks a bunch.

I hope you got that old guy's phone number so you can take regular curmudgeon lessons. Gotta be prepared for the future I say.

I really should have Pink Fluffy, he was a character I could learn from.