Someone recently found my blog by searching for "passion of the chairs".  And I thought my life was boring. 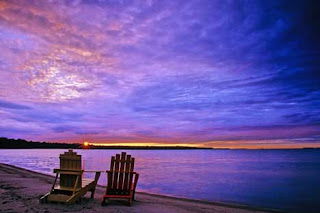 There is ongoing construction near my office building and as a result, there are security guards and construction workers accessing and egressing this building frequently.

This morning as I walked through the concourse toward the food court and hash brown heaven, I saw two construction workers stopped by one of the big plant boxes that dot the indoor landscape.

-Ya know what that is? That's hibiscus. The younger one nodded.

- It's a fucking azalea you moron!

People helping people, that's what it's all about.
Posted by Dale at 10:43 AM 19 comments

Do I Have To Hand Out Cigars?

There are few things I'm really good at. Right up there on the list though, is rampant personal consumerism. Taking me by more surprise than my credit card bill is the fact that now, I seem to have fallen in love. With a machine.

For a couple of weeks now, I've been cooing and calling my shiny new iMac 'baby'. I haven't heard back on my request for parental leave at work yet but I'm a patient man, I learned it from working with a PC.

Through several operating systems now, I've heard Mac fans sing the praises of their magical computing machines and now I understand. From box to desktop took all of 5 minutes and since then, there's been not a hint of concern from my whisper quiet baby.

Rather than go on like an ex-smoker insulted by a whiff of stray cigarette smoke, I’ll just say I’m happy to have had some quality time with PCs over the years but move over, there’s a new kid in town.

I Met The Walrus

I was catching up on my The Hour video podcasts and was really glad to catch a segment with Jerry Levitan who in 1969 at the tender age of 14, finagled his way into John Lennon's hotel room in Toronto and snagged an interview with him.
To hear Jerry talk about the experience was hilarious but to see the animated short film that's been made about his experience was incredible.  The film is called I Met The Walrus and is in contention for an Oscar.
If you have 9 minutes, watch the segment from The Hour first and then have a look at the actual film which is about 5 minutes long.
If you don't like either, as always, my policy is:  your money back!
Posted by Dale at 1:54 PM 16 comments

I've always enjoyed the way Google plays around with the masthead on their web page.  By replacing one or more letters with an object that fills in for the letter, they keep things interesting.

When other corporations go for an effect like this, it doesn't always hit the mark.  The bank I use, Scotiabank, is sponsoring the AIDS Walk For Life in September and has advertising all over town.
Someone had the idea to try and tie the red AIDS ribbon we're all familiar with into the bank's logo.  I may be the only one who sees it this way but that second 'a' in their logo now looks more like an 'o' if you ask me.

All I see now is Scotiabonk AIDS Walk For Life! Oh my.
Posted by Dale at 5:35 PM 26 comments

Links to this post
Labels: Aids Walk, corporate crap, Google, I'm not even mentioning the q in Banque, is there nowhere I can look and not worry, Scotiabank, who okays this stuff
Share |

Yes, I've decided that this should now be an all kittens, all the time blog. Click my GCast audio player on my sidebar to hear why. 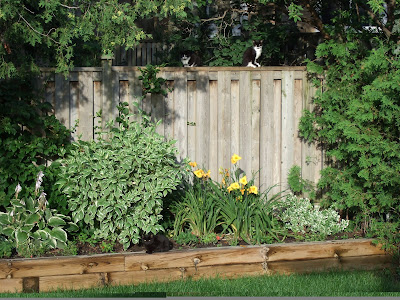 Compression of the Dale

In case you missed it in the comments a few posts back, after I rattled on about Honeypot's balancing act getting into her dee-luxe above ground pool with a smoke and a drink, the talented Sans Pantaloons came to my rescue and sent a link to this picture he did. Click on it for a more glorious effect.

If I ever write a book Sans, I hope you'll be there to help illustrate it.
Posted by Dale at 6:15 PM 22 comments

Last night I went to see Kathy Griffin who has finally stopped ignoring Canada and swept into town to share the love. After an introduction by way of a clip compilation from her various stints in TV and movie land (X Files? Really? Pulp Fiction? I'd forgotten about that), she kept the sold out and wildly appreciative crowd at Massey Hall laughing for a solid 130 minutes.

After ragging on us for being a bunch of socialists with free health care and having a boring prime minister, she launched into some fine and fiery skewering on the differences between Canadian and American Idol, trashy reality shows, young Hollywood, old Hollywood, George Dubya and her many strange encounters in the celebrity jungle.

There were hilarious stories about Oprah and her boyfriend Gail, Justin Timberlake, Tom, Katie and their Asian baby, Nancy Grace, Miley and Billy Ray, Pamela Anderson, PETA, Janet Jackson, Larry King and dozens of others worthy of our derision.

One of the things I really enjoy about Kathy (I call her Kathy) is her rare gift for making it seem as though it's just you and her, sharing stories and secrets. I know she was just being polite in pretending to include the other people there. She only had eyes for me. 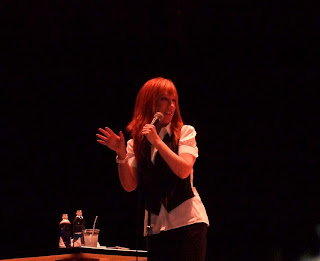 Thanks for a rollicking performance and one I won't soon forget, my body is still racked with pain from laughing so hard. Come back anytime Kathy and if for some reason you decide not to, well, you can suck it!
Posted by Dale at 11:44 AM 29 comments

I'll Arm Wrestle You For It

Cutesy children in advertising generally rankle me. They belong right up there with any ad that features an animal talking, singing or smiling. I suppose I could turn off the television but then how would I know what to buy or what the weather is?
I wouldn't give the product in this short ad another thought but I would give whoever cast the kid at the end a big fat bonus. Just this once.

Say it with me: Awwwwwwww.

Following my recent adventures in the animal kingdom, I should have just gone back to my regularly scheduled stint as a shut-in.

I was walking along the sidewalk of one of our main streets and didn't notice the pylon on the sidewalk until after I hit it with my left foot. There's been a lot of construction in the area and they sort of blend into the scenery for me.

When I tapped the side of this one, I looked down and sidestepped it and a rather massive raccoon. I jumped but it didn't. While fairly clean of coat, I'm sure the poor creature wasn't just sleeping off a long night's marauding, it was dead.

As hungry as I was at the time, my racing heart commanded that I shudder my way back home to safety. I've decided now that it's best if I limit my forays in the outside world to emergency situations only, for example, to see a movie.
Posted by Dale at 9:26 AM 30 comments