A Loaf In The Hand Is Worth...

One of my ride-a-long pals on the GO train was talking about a recent visit she made to a local groceteria and an encounter with another customer. I love colourful exchanges with the public as told by her because generally, she always seems to have been wronged in some way that I find entertaining.

The store she went to makes their own (very delicious) bread and they slice it for you while you wait. She had gone in for a loaf of their sourdough and was standing behind a man in line at the counter. There were only two loaves left and it was close to the end of the day. When he ordered one, she figured everything would be fine. As the counter person started to slice it for him, he said ‘You know what? I’ll take them both’.

Sensing there might still be hope, she leaned around and said ‘Ohhhhh, that’s why I was here lined up, I was hoping to get one of those sourdoughs too’. He didn’t bother turning around and instead addressed the counter person, ‘Too bad, I’m taking them both’.

The prospect of a long night with no sourdough set her off. ‘Well aren’t you a sweet man? I hope you really enjoy both those loaves and have a great night!’. Without looking at her, he brushed past her with the prize and said ‘Don’t worry, I will’.

She was livid and said she wouldn’t have minded so much if he hadn’t been rude to her. I wondered if that was true, I mean she did get all up in his grill pretty quickly right? After we stopped laughing, I said that while I might have given her the loaf depending on her tone, I would have been more likely to just sweetly say ‘Ohhhhh, sorry about that’.

We may never know who had the bigger bread emergency that night but I do know at least four people got a story out of it. 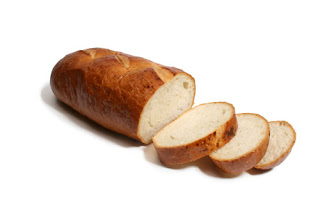 Wasn't this a Seinfeld episode?

I would have started eating the bread right there, making moaning yummy noises, sprinkling crumbs on her head, maybe even adding a chunk of Brie or a slice of fancy salami.

Your labels keep getting funnier, Dale. And this story? Makes me want to eat cake.

I admire the restraint of your friend.

If someone got between me and some delicious bread, there would probably be some violence, emotional or otherwise.

It sure was John and a lot of her stories sound suspiciously like sitcom plots but she does get into a lot of scrapes with a lot of people.

Excellent Tanya and I would have clapped at the sight.

Bella, hey! I'm glad you like, feel free to do a bit on 'what's the deal with these labels?' anytime. Mmmm cake.

I completely support violence where tasty ho made bread is at stake Splotchy.

I used to have a friend who got into spats like that all the time. I have never had a confrontation with another customer or a salesperson. I wonder what it is that sets some people off.

A good sourdough is tough to part with, you know. I agree with John, that does sound like an episode of Seinfeld. Excellent label usage!

ok, that's a funny yarn. the victimy types are always hilar. that's terrible, katie. don't be a cunt. wait, let me just get my cunt on for two shakes of a lamb.

I'm with you, if she was snatchy about it, I wouldn't give her the fuckin bread either. if she was nice and I wasn't having a dinner party or a binge fest for one, I would've given her the bread.

Freshly made bread...Yum!!!
Bring me a piece of their bread nect time you come down in the matirimes!!

Some people need the drama I guess Lulu although I have to admit, altercations, I've had a few.

Thanks Allison, I love me some sourdough too.

What's the saying Katie? The early Jew gets the dough.

First drinks and now you want bread too Jill? You're a demanding mistress.

I agree, it sounds like a Seinfeld episode. Maybe your friend should have her own sitcom :O) The smell of fresh sourdough would drive me over the edge MMMMM. Do you have Cobbs bakeries there Dale?

I think I would get along with this woman, as I would have been equally pissed when the guy was so brusque about it.

But I tend to be a big fan of common courtesy and can only eat at most half a loaf of bread in one sitting.

I think the not having the decency to face someone when speaking to them would've been my personal snapping point, but perhaps I tend to view life as my own personal sitcom in which I look for shit to be annoyed with.

I haven't heard of Cobbs Mel so I guess not! I know, the marble rye, the chocolate babka, all those great episodes!

I'd definitely watch Mobfeld! He was pretty rude for sure but the whole thing made me laugh and shake my head. This is why I avoid the people at all costs.

There are a few Cobbs in Toronto now (one at Bloor and Spadina) but I wasn't a fan. Too gooey and/or bland - certainly for the price.

But it was hard to be choosy there since are were so few bakeries. Brussels is rotten with them and I'm a happy girl.

FYI:
That happens at my place a LOT & I have never had someone not share with the other person in line behind them.

What the hell is wrong with you Canadians?!!?

Oddly enough, I had sourdough bread for breakfast.

I'm pretty certain I would have used your "Ooooooh sorry" method too, Dale, because I excel at passive-aggressiveness. Hey, it works!

Damn bread curmudgeons. They're a boil on the butt of humanity.

Man that had to be some good bread.

John, yes, it was both a marble rye and a chocolate babka. (Cinammon being lesser babka.) What an ass. It's not like he went up and ordered two; he only needed one, and decided at the last second to take two. Selfish prick. I hope he dies.

I've never run across one somehow Mistress. Lots of Greek bakeries where I used to live near the Danforth and some great ones at that.

We are bastards but polite except when see above.

Passive aggressiveness is something I admire Barbara, you continually amaze me with your many talents.

I'm pretty sure I would have most likely shared with you Andi.

You know what Winter? What you ask? It is damned good bread actually.

I've heard of sour grapes before, but this post gives sourdough a whole new meaning.

I'd bet that had that exchange taken place in the South Bronx, it would have wound up on the news. Somebody would have been shot.

I know what I want right now too Jill.

The only shooting was of dirty looks X. Dell. It's a different kind of warfare here.

"He didn’t bother turning around and instead addressed the counter person, ‘Too bad, I’m taking them both."

Ah, nice to see that chivalry is alive and well. That's chivalry with an "s," as in "shiv-alry." I'll take the loaves...and your purse!

She should've gone back to the old 30's Gangster Moll slang and said "I hope you choke, too!"

Knowing her, she might have said that back at him W.P.