War and Peace On Earth

Christmas is all about competition!  Whoever disagrees just doesn't understand my rules.

It's hard to say which piques my interest more - the frenzied price slashing between retailers, the people who demand attention with their elaborate light displays (I prefer a half assed effort), my own best and worst Christmas card judging event (poorly attended by all but by me) or, the contest to determine which sibling's gift to my parents will trump all others in the family canon.  Okay, it's that last one.

Through some longstanding failing, I continue to feel I must seek approval.  It's this defect that allows me to spend 8 or 9 bucks on a card as long as it gets the animosity rolling in the ranks.  It's usually an easy win with everyone getting to hear my mother repeat over and over who gave her the "most beautiful card" but on occasion, there can be added jeopardy.

If one of my n'er do well brothers awakens from a stupor long enough to remember it's the holidays, things get more complicated.  This doesn't happen often but that's not to say I haven't been blindsided on occasion.

Once, after everyone had ponied up with cards and gifts, we were blown out of the water by my brother's genius move of crudely cutting a poem (about mothers) out of the newspaper, putting it in an envelope and easily sailing to a first place showing.  That was talked about for years and I'm nearly over it (I'm still not over it).

The threat this year comes from another brother who has managed after 40 years of saucing himself beyond the pale, to find his way out of the darkness of alcoholism.  We're very happy for his success because hitting rock bottom one more time would have left a wound too deep to recover from.

The news ticker tells me that his evil plan for this year includes sending a box of chocolates along with a card proclaiming that these parents of ours are in fact the best parents ever!  Clearly, he's still not thinking straight but this move will have definite, immediate and major impact.  Him sending anything, including a box of dirt, would probably have the same import.

It's my definite view that the only thing my parents need, is to be institutionalized, but just the same, I've  sent them a large poinsettia to start and I'm currently narrowing the field on my final strike.  The flowers are a hit (I didn't know poinsettias came that big!) but I'm worried when those chocolates and that card arrive, my efforts will be for naught and he will have won.

Since it is the season for giving, I'm arguing with myself about whether to give up my whiny dynamic "...but I've been here all along and he's so, so…prodigal!" or not.  It may be the best gift I give myself to just concede and let the glow of my neighbour's 10,000 watt light display keep me warm.

Who knew Christmas warfare could be such a tiring affair?  We all do.  I'm sure of it.
Posted by Dale at 12:06 PM 18 comments

Labels: alcoholism, am I still really this childish, childishness, Christmas, light camera why is there an Eiffel tower in your display, Shady Pines, stupors are us, watts the frequency Kenneth, way to go Alan
Share |

The Pick Stops Here or Breakfast of Champion Trippers 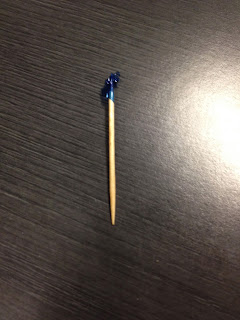 Every time I get a sandwich at the deli in the food court at work, after wrapping it, they stick those little party toothpicks through it and I think:  silly, what do they need those for?  They're stylish enough if you want to strike a pose with one in your teeth, sure, but otherwise?

After getting a breakfast sandwich this morning, I started back toward the office and tripped!  This sent my sandwich sliding several feet ahead.  As I sheepishly scooped it up, I was delighted to see it was intact.