Who Can Take A Nothing Day...

Now that Mary Tyler Moore's had all that freaky plastic surgery, the answer to the musical question 'Who can turn the world on with her smile?' is up for grabs again and I may know just the candidate.

I'm not generally known to be a shiny happy person anytime say, before 5 p.m. and lately when I go to get coffee from the Korean Bagel Lady, she's taken to saying things like "Why you not smile?" or "What's wrong? You look too serious today!". This of course forces me to smile and say "I'm fine!" while my brain screams "I'm fucking tired of winter and this coffee had better be good!"

If I happen to go for a hot beverage with the lovely Jessica, equal parts blonde and adorable, the Bagel Lady lights up like a Fourth of July Canada Day fireworks display and I fade into the background which suits me just fine.

When we stopped for coffee today, she looked at Jessica and said "Hi Sunshine!" and then turned to me and said "Hi Sundown". We all laughed and I died a little inside.
Posted by Dale at 8:09 PM 45 comments

Labels: for the record I die a little inside many times throughout the winter, is that better Beckeye?, Korean bagel lady, Mary Tyler Moore, The Lion in Winter
Share |

After Grant Miller left me a cryptic message in the snow yesterday, I puzzled over just how powerful this character might be.

He quickly realized I was on to him and conspired with the elements once more to remove any evidence he'd been there. As my camera was nearby, I have at least some evidence left to study. Grant works in mysterious ways.

Pride comes before a fall - how many times have I heard that? While I'm not trying to debunk the words of the Hebrews or the rock band Sweet, sometimes there are other forces, like gravity, that come into play.

While it would be easy to say I was a deep thinker as a child and unaware of my surroundings, the truth is, I was plain old clumsy. Slipping, tripping and falling helped me decorate my early life in shades of black and blue.

When the gang would be riding bikes down a hill or over a ramp, I'd be the one that ended up going over the handlebars; when we were pushing each other into the deep end of the pool, I was the one who instead of hitting the water, hit my front teeth on the cement border surrounding it. I could go on but let's just say steady as he goes is not how anyone would have described me.

It was fun for a while using the old "I fell off the swing" defense when someone asked what had happened to me but when the social workers started showing up, I knew I needed a new tack.

I decided to make an effort to think before I walked, ran, leapt or dove. It worked to an extent except when I forgot myself and did something boneheaded like running out from between parked cars.

I'm forever indebted to Pong for helping me achieve a little better hand eye coordination but I still have to think about the simplest motor movements to keep myself from ending up splayed across the universe.

On my way down the stairs from the train to the concourse on my way to work, I always step carefully knowing well that one false move could start a chain reaction injuring dozens. A few days ago, I'd just I started my in-head mantra (left, right, left, right) when the man ahead of me lost his footing and slipped down three stairs. He nearly took out the girl in front of him eliciting gasps and are you alrights from the people around him.

Me? I had to quell the urge to burst out laughing. I mean really, is there anything funnier than hands and arms flailing like that? Loser.
Posted by Dale at 9:48 AM 30 comments

This Is Pop? (Redux)

I've been a delinquent writer and reader lately but I make no excuses, just a mention.

As it's Easter time, find forgiveness in your hearts as I repost something from the archives that sums up nearly everything you need to know about me.

In honour of the torture that I put my mother through each Easter, I have spent many seconds composing something worthy of her ire:

All around the burning bush
The heathens chased the Jesus
They tacked him up but three days in
Pop! goes the Jesus

Poor Mothra. Every year she falls victim to my retelling of the same old jokes, never remembers the punchline and is suitably horrified when I relate the following:

What did Jesus say while he was up on the cross? Get my flats, these spikes are killing me.

I am a bad son. I'm good with that though.

I hope everyone gets and enjoys a nice long weekend. And chocolate for all!
Posted by Dale at 8:30 AM 36 comments

Labels: delinquent, Easter, lazy blogging, my mother is Edith Bunker, please note the expressive use of blood of Christ red for my poetic creation
Share |

My mother recently called my sister to say:

I was driving down a narrow street and cars were parked on both sides. The next thing I knew, my side view mirror was gone! And do you know how much it cost to replace? It was two hundred and some dollars! Can you imagine?!
She made no other mention of the hit and run parked car violation.
Posted by Dale at 10:15 PM 43 comments

Labels: aren't you secretly glad the kid on American Idol forgot the words?, random thoughts, the role of Edith Bunker will be played by my mother, time wasters, use it or lose it
Share |

Do I Look Old In This? 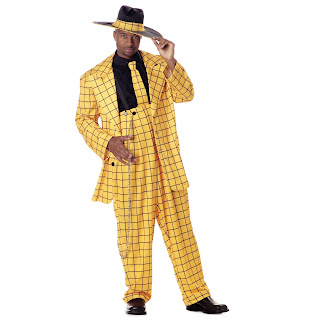 Today I had to wear a suit to work for a job interview that I'm pretty sure I sucked at. The best part walking among the sloppy dressers was the comments: Oh! Look at you! You must have a job interview! and Going to a funeral?

My favourite remark came from Mr. Korean Bagel Lady who was co-minding the bagel joint today. You look one year younger dressed up. You're 45 right? When I replied I'm 44, he cackled his Oh, sorry! and sent me on my way.

I Made It Through The Wilderness

Not being the type to play with matches (I prefer lighters) it's difficult to figure why fire always wants to make friends with me. Yes, I dabbled in candle making for a while and sure, I was in Las Vegas when the Monte Carlo hotel caught fire but that probably had nothing to do with me.

I haven't even written about an incident several years ago where I walked into my brother's high rise apartment to find it engulfed in flames. I had to wake him from a stupor to get him to safety but for now, I'm concentrating on adding my Dad's 80th birthday celebration dinner to the fire story archives.

Six of the nine offspring made it home to pay homage to Dad and we were joined by assorted in-laws, friends and relatives. The plan was for a nice dinner at a Chinese restaurant which had a private room to contain our rambunctiousness until we could make it to the after party at my sister's house.

On our way to the restaurant, a snowstorm just getting underway helped make the drive a true labour of love. We arrived to greetings from a world weary waitress with a complexion the colour of waxy buildup. She showed us to our seats and we got to figuring which delights on offer we'd order. I settled on a Szechuan combination plate that included Lemon Chicken. I asked if I could have the lemon sauce on the side and her reply of "If I remember" set the tone for service.

We haphazardly received our meals but spirits remained high through all our funning and everything was excellent. Dinner wound down while the storm raged on, the flickering lights generating more conversation about the storm. I figured if the power went out, so would the electric abacus and there might be trouble figuring out how to pay.

Nearing the end of our meal, the waitress re-entered the room with a piece of cake lit with a single candle for the guest of honour as the lights blinked some more. "Oh, the lights are flickering in here too?" she asked. "Must be the storm" someone answered. "Oh no, there's an electrical fire in the wall at the back of the restaurant but it's nothing to worry about. If you hear sirens or see firetrucks pulling up, don't worry, just enjoy the rest of your meal!". Her exit was far less dramatic than her last statement.

The roomful of confused patrons left in her wake puzzled over what she'd said: "A fire? In the wall? Did she say just say there was a fire in the wall?" "Should we still be here if there's a fire?" "Was she serious?"

A minute or so later, a troop of firefighters stormed into the restaurant with axes and a chainsaw. They looked at us as and quickly sent the manager in. "I'm sorry but the firemen think we should ask people to leave the restaurant, sorry!" he said beating his retreat.

We donned our coats and made a Seinfeldian run for it as my parents lingered at the back of the line. I'm glad I didn't have to push either of them out of my way, that may have looked bad. The smell of smoke was just becoming evident as we slipped and slid our way into the parking lot toward our cars with the other confused patrons.

There seemed to be nothing else to do but leave so we did. Everyone had trouble navigating through the blizzard but we all made it back safely to my sister's place. We had a good laugh at the strange turn of events and much cake and liquor was consumed, my father enjoying the festivities very much.

The storm led to cancellation of my flight home the following day and so I got an unplanned but nice extra day to recover and debrief the celebrations.

The restaurant ended up with a section of wall chainsawed out but the problem was fixed, patched up and they reopened two days later. We checked in on the bill and they knocked 75 dollars from the total for the inconvenience of having our lives endangered.

I made it home the following night and now we're in the middle of a snowstorm here. I really wish I didn't have to work. Anyone got a light?

*Edit: It struck me after reading this again that I didn't clarify that the waitress was Caucasian. It wouldn't really matter although my description of her 'waxy buildup' may have sounded mildly racist as in 'waxy yellow buildup' from an old commercial I remember. I'm never mildly racist, I always go full out.
Posted by Dale at 5:28 PM 41 comments

Labels: Dad, family, fire, fire walk with me, Firehouse, snowbound, stranded, we didn't start the fire, with two you get fire
Share |

The short version - my Dad turned 80, relatives arrived, the Chinese restaurant we went to caught fire during our meal and we had to be evacuated.

I was to leave town this morning but we've been hit with just the type of flight canceling snowstorm I adore. I won't be able to get a flight out until tomorrow evening.

Labels: family, try do something nice and they call 9-1-1, whether to blog about weather
Share |
Newer Posts Older Posts Home
Subscribe to: Posts (Atom)
Copyright: 2004 to Infinity + 1