Whenever I attend a presentation at work, part of the fun is hearing the mind numbingly stupid questions people ask highlighting that they haven't been listening. Yes, there are stupid questions and usually, they're asked by some pretty stupid or at least inattentive people.


Often, the presenter will hand out an evaluation questionnaire at the end of the session. Today, the presenter gave them out before she'd even started. So far, your driving's excellent Miss Presenter!


My attention was drawn to the layout and wording of the evaluation. It asked questions about how relevant the information was to your job and requested that you Place a check mark (X) in the box beside your desired response.


There was a comment section as well and I couldn't resist (well, I could have) letting her know that an X is not a check mark. It was my random act of assholishness kindness for the day.
Posted by Dale at 8:26 PM 30 comments

Labels: people are stupid, stupidity, war is stupid, what would a blogger do?, X marks the spot where the check should be
Share |

Do You Hear What I Hear? (An Audio Post)

If you're like me, you need help. If you're not like me but wonder how magic can almost happen on the weekend, I've got just the thing.

Okay, maybe it's not just the thing but if you've got 55 seconds to spare, you're in for quite a thrill ride.

Alright, it's not a thrill ride at all but for sure, it'll tell you something about my brain.

Head on over to the Let's Go Audio GCast player on my sidebar (look to your right under the bumblebee) and listen in.

Labels: It sounded like a warped record, the dream never dies just the dreamer, the sound of a different drumstick, triangles mean play
Share |

Last weekend was lovely, not only because it was a long weekend here in Canadaland but also because I got to spend time in one of my favourite places, New Jack York City. While there, I barely had time to complain about my hotel room, change rooms and then change hotels entirely, take in three shows of varying quality, shop, drink, eat my body weight and then walk it all off.

I got to see my pals Coaster Punchman and Poor George, Chelene and Beckeye, all who remain wonders of the world. Beckeye and Chelene have blogged their point / counterpoint on Xanadu so I’ll just mention my disappointment with The Country Girl (well chronicled here by Esther and Steve, two bloggers I've recently been enjoying). Frances McDormand and Morgan Freeman while wonderful to see, were not at their most captivating. Peter Gallagher however was on point and he and his eyebrows did some fine acting.

The prize for unplanned but incredible event was seeing Gypsy starring Patti Lupone. One word: mesmerizing. Another word: spellbinding. Third word: electric. The whole show was excellent and the entire cast worked and played their hearts out. I lucked into some 2nd row centre seats and locked eyes with several of the principals which while thrilling was off-putting - what if my perma-grin made them break character wondering what I was up to? I give this production 4 Mama Roses (out of 4)!

Now I'm back to the real world and at work. I'm heading off in a minute to Gilligan's Island for a 3 hour meeting. I'll do my best to provide the laugh track because I'm certain there's no hope of rescue.
Posted by Dale at 8:43 AM 22 comments

There's seems to be a lot more art hanging around the city than there used to be and I notice more of it each time I decide not to litter.

Garbage and recycling bins around the downtown core have been festooned by Canadian artists courtesy of an outfit called Magenta. They're doing a swell job at supporting the arts and emerging talent.

Stopping for a moment longer than it takes to dispose of my coffee cup teaches me a little bit more about the participants and their vision, easier done since a blurb about them is printed on the sides of the bins.

Rather than just trash talking all the time, may I take this quiet moment to say that I love it when ideas like this take hold? A sampling of what I'm talking about can be found here.

Labels: bin there done that, can it, colour my world, garbage cans say the darndest things, random thoughts, she blinded me with garbage, Shirley Manson
Share |

Life can be so fast paced that slowing down seems like a concession. I don't generally confront this fact until forced to, as when I find myself walking behind a group of older people.

Look at them, so dear and so wise. They may not smell like you and me but they know more than just how to crowd a sidewalk. They're in the most important footrace but still manage to savour each moment as they make their way.

Someday, that'll be me - stealth no longer mine, my body a network of betrayal. Then my instincts take over. A couple of well placed kicks and canes and limbs go flying. I laugh along my way to new adventures and know they barely have time to even wonder what hit them. Ah, to be youngish.
Posted by Dale at 7:49 AM 24 comments

Labels: blue hair, I hope I die before I get (too) old, I'm walking here, oh life, random thoughts, what's that smell?
Share |

It's been quite some time since I've done an audio blog post and so, please direct yourself to the little GCast player on my sidebar to the right (under Let's Go Audio) and press play. It clocks in at a very lengthy 86 seconds so hopefully, it won't hurt too much.

It's going to be a long summer. How do I know? Honeypot's got a new man (or an old one) and it could get pretty sleazy. If I'm lucky.
Posted by Dale at 6:27 AM 23 comments

Today I found myself wrapped up in an accidental enterprise. I was minding my own (and everyone else's) business walking the block or so back from the bank to my office. Crossing the street, I spied a decent sized group of middle aged tourist types. My recourse seemed simple - I'd swath right through the centre of them and continue on my way.

As I started through, they somehow closed in around me and boom - I'm on a guided walking tour led by someone clucking in umlauts and hurdy gurdy wordiness. Dutch I figured.

It took a bit of jostling but I freed myself as quickly as possible and carried on my way. For a moment, and my trouble, I considered letting them in on this great place I know for coffee but my chewy Canadian centre wouldn't allow it - we need the tourist dollars.

You're welcome Canada! My country 'tis of thee. Wait, wrong country. Never mind.
Posted by Dale at 11:40 AM 26 comments

Honey For The Bees

My Guitar Hero fascination has waned sufficiently that I no longer feel withdrawal pains when I'm away from my plastic toy (that didn't sound right). Interest may be renewed when the Aerosmith edition lands in a store near me but only if a Steven Tyler scarf is included to hang on the end of my guitar (and by guitar, I mean guitar).

You'd think this would free me up to get outdoors and spy on Honeypot more. No, I busy myself now with praying for rain so as not to feel guilty about strapping myself in for hours and playing Super Mario Galaxy. Although the cartoon violence is mild, I make sure to swear as much as possible while failing at ridiculous tasks to make it seem more like an adult pursuit.

At points in the game, Mario gets a little help by transforming and acquiring new abilities. When he turned into a bee, I thought, I really should be blogging. I waited several hours until that passed but now I'm in between galaxies so here I am. 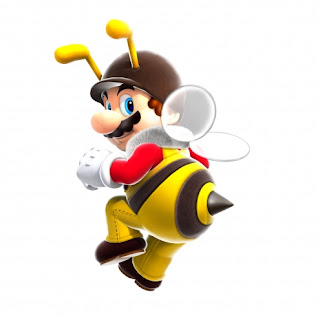 In other news, I'll be calling the first lady of tact in a short while to wish her a Happy Mother's Day. I sent her a book I think she'll enjoy and hope she'll remember not to try reading it while driving. The most comforting part of the call is in our ritual at the end. Her "I wish you were closer" will be answered by my "yes, I know". I'm fairly sure the quiet delight that I'm not, goes unnoticed.

It's looking like a decent day shaping up so I really should fly and see what the buzz is in the outside world.
Posted by Dale at 6:45 AM 29 comments

This Is Not A Love Song (KBL Edition)

After being Korean Bagel Lady'd (thanks for the terminology Barbara), I realized there was a bit of information I'd forgotten to impart. While I'm still compiling documentary evidence of her henchwoman for Kim Jong Il status, I now at least know her name. She has a name ladies and gentlemen!

Back in the carefree days before she tried to poison me, I overheard someone at the counter say "Hi Joanne!" in the Bagel Lady's general direction. I asked if that was indeed her name and she verified it. I told her I'd expected something a little more exotic. She said "Well, my real name is Gin". Seeing her neckerchiefed helper working in the back, I said "So I guess you two are like Gin & Tonic then?". Her humourless "No" dashed my hopes of writing a buddy cop screenplay based on their adventures.

It wasn't until Coaster Punchman commented that if the Korean Bagel Lady and his nemesis Mama Gin met, they might cancel each other out that this fact returned to me. Reading that was like being struck with the force of, I'd say, four to six stale bagels. There are two Gins! Evil twin Gins perhaps separated at birth and by nation.

All this Gin flowing seems to support my view that evil grows in the dark, where the sun it never shines. If I was a man of prayer, I might say Saints preserve us! Instead, I'll just cling to to my belief that I'm tastier than her coffee will ever be.
Posted by Dale at 7:22 AM 26 comments