I See London, I See France, I Have Wet My Underpants!

I just got back from a lovely vacation spent in London and Paris (not the Ontario versions but their European counterparts) and as I've now recovered from the lovely spring cold I got on my way back, I almost have energy enough to talk about it.


After putting in what seemed like an eternity at the airport (why does time seem so much less fluid there?), John and I boarded and settled into our seats.  Also settling into my seat shortly after takeoff was a full glass of white wine.  When you're wearing light grey pants, a healthy serving of wine in the crotchal area can only look like a terrible mid-air accident.  My secret shame lasted about 3 hours.  Dry but still cranky, I managed a little sleep before arriving in London.
The hotel near the Marble Arch was elegant and almost entirely populated with Middle Eastern military men in several different styles of uniform.  I wasn't sure whether to feel worried or safe.  At one point, I was sitting just outside the hotel and a few of them came out to smoke and within a couple of minutes, I was surrounded by 26 of them (I counted) saluting one another and eyeing me suspiciously.  When a large van advertising Al Jazeera TV collected several of them with their shopping bags and cameras, I allowed myself to back down to medium alert status.


The weather overall in London was quite nice though a bit windy at times, just how I might describe myself.  After a few moments of confusion, we mastered the Underground system but didn't realize when they say underground, they really mean underground!  Many of the escalators were several stories high and the system of tunnels could accurately be described as labyrinthine.


When I visited London in 2007, I took in a lot of the sights - Kensington Palace (Lady Di's home), Buckingham Palace (the house of Liz), the London Eye (the ferris wheel), Harrod's, The Tower of London, Windsor Castle and Hampton Court (Henry the 8th's place) among other things - and so this time focused on things I hadn't seen or done.  Sadly this time, there was no Coaster Punchman or Melinda June to meet up with.


I managed to get to both Tate museums (the Britain and the Modern) using the handy ferry service across the Thames, the National Portrait Gallery (showing everything from The Tudors to Warhol's Liz Taylor), the Duke of Wellington's mansion (eat that Napoleon!) and of course I ate my way through several servings of fish and chips and mushy peas at the stunning Black Friar Pub and one of the Gordon Ramsay pubs.  I also ate at the OXO Tower high above the Thames, in the food halls at Harvey Nichol's, visited Shakespeare's Globe Theatre, St. Paul's Cathedral, shopped at the Camden and Portobello Road markets (junk and antiques respectively) and generally enjoyed the people watching.
Did you know you can drink in the theatres in London?  Yep, beer, wine, anything you'd like really.  All the better to empathize along with Tracie Bennett in her tour de force performance as a boozy, pill popping Judy Garland in the excellent drama "End of the Rainbow" and through another very darkly comic drama courtesy of Mike Leigh called "Ecstasy". 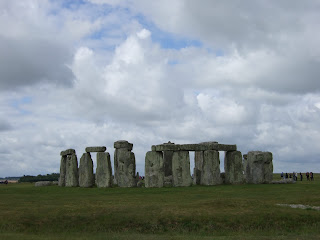 Our guide for a day trip to Stonehenge and the town of Bath, Steve Evans,  was quintessentially British and quite a comedian but very knowledgeable.  Thanks to him, Stonehenge is no longer a pile of old rocks to me but rather a mystical burial site (made of a pile of old rocks) that Steve had lots of information and fascinating facts about.


He also gave me enough knowledge that I can now point out where Johnny Depp lives in Bath and tell you that Jude Law, Peter Gabriel, Nicholas Cage and Jane Seymour also have homes there.  Jane Austen lived and wrote there and a pudgy Mr. Darcy waves to you as you walk by the Jane Austen Centre.  As Steve pointed out, he's put on a bit of weight since the movie.


The Roman Baths and Pump House Restaurant were intriguing and delicious in that order.  I didn't realize that the "Solsbury Hill"  Peter Gabriel sings about overlooks the town so it was a great bonus seeing that.  Bath with it's beautiful Abbey and streets made for strolling was just lovely and well worth the trip.  I'm still thinking about the best salad I've ever had thanks to the Pump House - warm butternut squash with bacon, blue cheese, walnuts and greens.


Taking the Eurostar to Paris was uneventful and interestingly, out of the 2 hour or so trip, you're only under the English Channel for 28 minutes and don't get to see the water approaching or leaving the tunnel.  A little English countryside, a tunnel, a snack, French countryside and boom, you're at Gare du Nord!
Paris was quite a sight to see.  Incredible architecture (a lot of it similar), monuments, bistros, and people watching.  The main disappointment I felt was in seeing the excess of graffiti there was everywhere, no Banksy style stuff, just random letters playing tag with beautiful old buildings.


The apartment we rented was charming and fully decked out with kitchen, laundry and all the amenities.  It even had two small balconies.  There was a great bakery nearby for fresh baguettes and croissants each day and open air markets nearby for fresh cheeses and meats, all delicious with the exception of the wild boar cold cuts I was forced into trying.
Most of the menus in Paris featured steak tartare (raw hamburger) alongside various cuts of horse, duck and rabbit.  I managed to find some beef and pork but had to settle for guinea fowl rather than chicken. Did I mention pigeon was on the menu in London?  No thank you.  I did manage to have a delicious escargots and artichoke soup, French Onion soup, beef bourguignon and a hamburger with a fried egg and bacon on top among other things!  A couple of my favourite restaurants were Bofinger (probably not sung to the tune of Goldfinger) where we got to sit under their beautiful glass ceiling and L'Oulette where the manager was a dead ringer for this guy from SNL's Ambiguously Gay Duo series:


The food and wine were excellent once I figured out what I was ordering and the French seemed willing to try and translate as required.  One tourist asked a waitress what was in a Quiche Lorraine (she pronounced quiche - kwish).  The waitress struggled and came up with 'it has a type of meat but cut small'.  I could have helped but chose not to because listening to the rest of the exchange was just as entertaining.
The Parisians were generally helpful and polite but once they'd hear a few of my weak attempts at French, they'd switch right over to their version of English.  The main difference seemed to be in the stores.  Here, you're bombarded and harangued by sales staff the moment you enter but it was tough work getting anyone to even make eye contact in most of the stores, especially the pricier joints.  They also disapprove of the pawing through of items and pretty much demanded to know what you were looking for so they could pick it off the rack for your viewing.

I walked the Champs Elysee though I could barely afford the coffee let alone designer duds, saw the Arc de Triomphe and from there walked to the Eiffel Tower.  After about an hour's wait to ride the elevator up, I got to see incredible views of the city and then walked the 43 stories down!  The shopping at Galleries Lafayette was pricey but the beautiful setting with its amazing glass roof made you want to stay.  There are 6 restaurants in this Grand Magasin so staying was no hardship.  Au Printemps next door also had a beautiful cupola and I believe 8 restaurants.
The Musee D'Orsay housed in an old train station was remarkable not only for the architecture but for the collection of Impressionist works.  I got to see some very famous paintings and sculpture by Monet, Degas, Matisse, Van Gogh (before he cut his ear off), Picasso and hey - what's Whistler's Mother doing here?


I toured and visited the Palais Garnier (the spectacular opera house), Napoleon's Crypt (small man, large monument), the Tuiliries Gardens, the Moulin Rouge, St. Chapelle (beautiful stained glass and a one hour classical music concert on the altar), Sacre Coeur in Montmartre and I also went to Versailles.

While spectacular, I was more than a little disappointed with the jostling crowds at Versailles and that the fountains in the massive gardens (800 hectares worth) were not yet turned on.  I bought a DVD of that so I could see what I missed along with a DVD for the Louvre because by week's end, I lacked the drive to tackle this imposing museum.
In London, everyone was in suits and stylish outfits while in Paris, it was all sweaters and scarves on everyone.  I did draw a few scowls in Paris for wearing shorts on a few of the hotter days, forgive me Frenchies, I'll try harder next time.
Overall, I had a great time and would visit both cities again.  John and I took a different flight than our friends Deborah and Ian and thanks to our Nexus cards, whizzed through Customs in a minute while they spent over an hour and a half in the regular customs line.  C'est la vie babies, c'est la vie!

Labels: holidays, I have more photos but who knows when I'll upload them, London, Paris., the Bofinger photo isn't mine nor is the SNL one but the rest are, vacation
Share |
Newer Posts Older Posts Home
Subscribe to: Posts (Atom)
Copyright: 2004 to Infinity + 1