My longstanding instinct when anyone asks how my mother is, is to say "crazy".  It's always been tough discerning antics from bonafide symptoms with that one.  I could say that anyone who's taken the time to have (and more or less raise) 9 children might be expected to be a little off her game but she did follow the rules printed in the manual:  be fruitful and multiply.


Mother has always had an interesting approach.  She once came home dismayed over the cost of replacing the side view mirror on her car without expressing any concern over who or what she'd sideswiped to lose the thing.  When I was a smoker, she'd cough at the mere sight of a pack of matches to register disapproval.

Her most recent habit is to call my sister hinting that if she was going to the store, but only if she was going!, she needs milk, or bread, or something.  My sister dutifully drops what she's doing and shows up with the requested item to be greeted with "I guess you never thought to bring dessert".  With a nun in the family, there must be paperwork she can start to put my sister on the road to sainthood.

It's never easy to tell which mother you'll get.  One day it's "I had such a good sleep" and another it's "I had a vision last night" and then you have to settle in.  Unsettling.

I pay little attention to the higher power my mother's always inciting but knowing she'd most likely be impressed with a call from Rome, I did just that to say hi and let her know I was at that moment looking up at the Papal apartment from St. Peter's Square.   She was truly amazed, with how clear the phone connection was.

For lasting impact, I bought her some jewellery in the Eternal City thinking this might hold some higher stead.  I could almost hear her pride-sinning to her friends  "My son bought it for me in Rome!".  Instead, she promptly lost the necklace and said "You can get me another one".

I wrote a travelogue of my recent vacation and emailed it to my sisters.  One of them printed it off and gave a copy to my mother.  Now this impressed her!  She even wrote me an old tyme letter to tell me:  "We were amazed, it is so well done.  Isn't it wonderful what people can do if given half a chance?"

There's no telling what's going on in that mind from minute to minute but I suppose I should just thank her for the 'half a chance'.
Posted by Dale at 12:18 PM 16 comments

Labels: basic instinct, blurred lines, dementia, it ain't over til the fat lady smothers you for the first 18 years of your life and then forces you to dance with her, Rome
Share |

The revelation a few days ago about a cache of art found in a Munich apartment reminded me of a documentary I'd been wanting to see.

The Rape of Europa is about the systematic theft of art throughout Europe by the Nazis.  From plunder to recovery, the full on horror and beauty man is capable of is on display.

The film is a fascinating perspective I hadn't seen before on the war and gave me another way to say "Thank you for your service".

I couldn't get the YouTube link to work but if you search The Rape of Europa, there's a great trailer for the film there.

Labels: art, art theft, beauty, documentary, horror, nazi, people are the best, people are the worst, plunder, Remembrance Day, thank you for your service, The Rape of Europa, trailers
Share |

Can anyone explain why we need 4 seasons?

Snow flurries this morning remind me of the only positive thing I can think of about winter - fewer shirts to iron!  Sweaters do all the heavy lifting!  Maybe they'd be willing to take in the patio furniture? 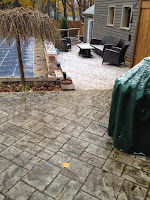 Labels: 4 seasons, Canada, cold, couldn't Franki Valli have done it with 3, eft off winter, I hate winter, too lazy to bring in the furniture, winter, winter sucks
Share |

A while back, I had the opportunity to shift focus and start work in a new area.  This meant I got to keep all my old material and fling it at a somewhat interested new audience.

I now sit across from and in front of a couple of cheeky and charming British women both of whom have accents I could and do listen to all day.

Not long after I pulled up stakes and joined this group, another of my team members remarked to the British contingent while I was away:

"Isn't it a coincidence that all the Brits ended up sitting near each other?" to which the question was raised "Who do you mean?"  "Well, you two and Dale.  You all ended up sitting together!"  "Dale's not British."  "Oh? I thought he was because of his accent."

My voice, if you've heard it, does not sound like I was raised in the United Kingdom.  This is largely because, I wasn't.  My voice has a simple east coast Canadian trying not to sound too much like the trash I came from tone to it.

I'm not sure what we can learn from my co-worker's aural error other than to put some stock in the fact that perhaps regular ear cleaning can help you understand the world around you.

In the meantime, I remain pleased to sit near good folk who have an excellent and intriguing command of the language, who still laugh at my tired old jokes and who are as charming as fuck.

Labels: accent, Britain, cheeky, east coast, I just like the way the word aural looks, now hear this, trash, where the hell have I been?, work
Share |
Newer Posts Older Posts Home
Subscribe to: Posts (Atom)
Copyright: 2004 to Infinity + 1