In an attempt to keep the magic of the holiday season alive, I've done an audio blog you can find on my sidebar.

If your days haven't been merry and bright, better luck next year!
Posted by Dale at 8:25 AM 27 comments

Labels: audio blog, chirpy chirpy cheap cheap, Christmas cards, holidays, not a contest like the Seinfeld one, okay so maybe the judging is over at least for this, precious moments
Share |

Stealing a page from Melinda June's excellent Christmas Memories series (collect them all!), it is time for me to present you with a Christmas memory I scarcely remember. Luckily, the magic's been captured in this photograph from the archives. 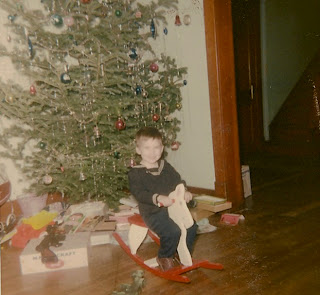 Labels: check out the orthopaedic style shoes, Christmas, Dale the thief, I guess we couldn't afford garland, Melinda June, that's not a lot of presents for 9 kids
Share |

Do They Know It's Christmas?

As the song goes: It's Christmastime, there's no need to be afraid.

Whoever wrote that doesn't live next door to Honeypot. Approaching my driveway a few nights ago, I saw my dear and brassy neighbor in her front window putting the death star atop her Christmas tree.

Last year, her tree was on display and well lit day and night from mid-November through to January. I expected it was an artificial tree until I saw the remains in the snowbank after the holidays. How she kept it alive all that time and avoided calling the Fire Brigade about her burning bush is beyond my comprehension.

The spirit of the season has moved even the Korean Bagel Lady this year. Her heart opened wide the other day when she decided to Feed the World by giving me a free bagel and coffee. Mr. Korean Bagel Lady scowled on from the back so I just smiled while I collected my bounty. She leaned in and conspiratorially implored don't look at him, it is illegal! I laughed and walked away thinking, so is the threat of adding bleach to my coffee.

Other signs that something miraculous this way comes is that my next few train rides home from work will be like a Silent Night even Stevie Nicks couldn't ruin. The Elvis invoking train conductor has hung up the Santa hat he's been wearing and is now on vacation, ahhh.

He spent much of last week ambushing anyone who walked by him with a fart machine. Generosity of spirit allows me to make no judgment on a sixty-something year old man with a fart machine (especially as I'm a forty-something man who's spent several weeks playing a plastic guitar). My only hope for him for the new year is that he forgets to come back to work or failing that, that someone gives him a whoopee cushion for Christmas, it's time to branch out buddy.
Posted by Dale at 10:50 AM 30 comments

Labels: Christmas, Elvis train conductor, Honeypot, if he wore the jumpsuit I'd like him better, if they're wise they won't follow the star to her house, Korean bagel lady, self referential linking
Share |

For quite a while, I allowed the public debate about whether those shoes designed for the garden were better left there or if they were alright for everyday wear to rage on without me. I hadn't formed a definite opinion because I hadn't actually tried them on.

Now that I've slipped my foot into one, there may be no turning back.

One question remains - how do you get the lid on without breaking your leg or the shoe? 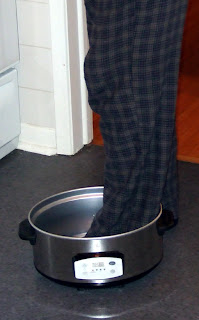 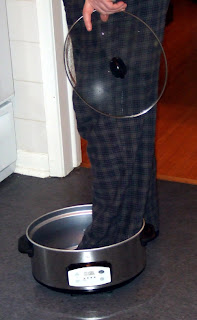 The Man Comes Around

While I try not to be the type that covets, I remember well the desperation I felt at wanting a xylophone like one of the neighborhood kids had when I was growing up. Hers was a miniature version of the real thing and was quite shiny and desirable and made the loveliest sound. My dreams were partially realized, if only in plastic, one year on my birthday. 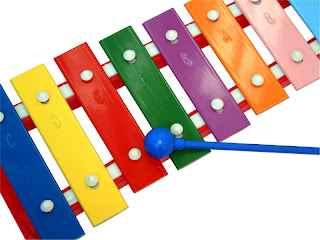 It took little time for me to study the colour charts in the song booklet and bang out with as much precision as the little beaters would allow, the many awful children's songs on offer. I'm not sure what became of my toy xylophone but I think I've found a worthy replacement lo these many years later.

As a card carrying gawky pre-teen member of the Junior Choir at church, I played a smoking version of Jesus is Lord on the guitar, all two chords of it. While I haven't been near a guitar in years, I recently found in my hands a Les Paul Gibson. It's a miniature version and in plastic but with its colour coded keys to guide me, once again, I'm a guitar hero. Alright, so it's the guitar that comes with Nintendo Wii's Guitar Hero 3 but it produces no less a joyous noise than my real one from long ago.

You press the colour keys on the frets to match what you see on the screen and strum each note. In no time, you're a superstar, at least I am on Easy mode. Each difficulty level adds more notes and requires more dexterity. I'm halfway through the Medium setting and show no signs of stopping. Alright, there are signs, the threat of blisters and bleary eyes but if it makes me happy...

At various points in the game you must do battle against guitarists such as Tom Morello of Rage Against The Machine and Slash from well, from under that hat, to progress. Welcome to the jungle baby!

Here's someone playing along with Heart's Barracuda on Expert. I'm no expert. Yet.

Someone at work was showing me a magazine called Viva which I'd never heard of. It had a recipe section featuring dishes Fit for a Star and most of the dishes looked pretty good.

It was a bit of a different story when it came to the dessert section though.

Although you might not need to click to enlarge the photo to get the point, have a read at what they've put beside Patrick Swayze's photo. I didn't doctor (or lawyer) this at all.

To make things stranger yet, the photo credit is to Michael Crichton. 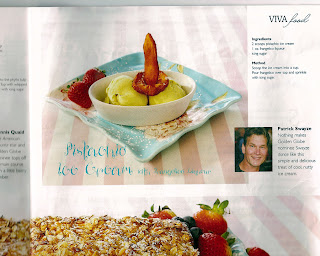 Labels: Dirty Dancing, I've never seen the movie, magazines, this stuff you can't make up although recipes you can
Share |

I dreamed I was walking through a part of town I don’t live in and haven’t been near in years. The sidewalks were teeming with people pushing cases of all sorts of artifacts and items like books and clothes. It seemed like a very large and portable marketplace surrounding me. I pointed to a shelf of dvds blocking the entrance to a shop and explained to someone going by that some of the movies were from me because I wanted to help one of the shopkeepers who’d been in some sort of trouble.

The scene shifted to a subway type platform and a black girl was walking by me singing something very soulful but indistinguishable. I marveled at the sound and found myself again in a crowd on a narrow makeshift pathway near my office.

The route was marked with string and pickets and lined with hordes of children who were laughing and shouting. The idea was that you were supposed to pick up a trophy from a box on the right side and a badge from the back of a pick up truck on the left as you went along. I waved them off and they accepted this as they knew I was just going through to get to my building which I could now see across the street.

After making it through the crowd, I ended up at the foot of a hill that used to be near my childhood home. I started up the hill and was walking just behind and to the side of another black woman who I recognized but couldn’t place. I began telling her about the woman I’d heard singing earlier and she smiled at me and nodded while I talked and she said good-bye to me as she entered a house at the top of the hill.

As I started back down the hill, I realized I would probably be late for work and so I took out my cell phone from my pants pocket to make a call to my boss. It wasn’t my current phone but one I used to have. As I flipped it open, two dead bugs on their backs lay crushed against the screen. They were long slender bugs with wings and reminded me of earwigs.

I rummaged for and found a tissue to wipe them away with but then one of them stirred, flipped over and flew away. I could tell the other one was definitely dead but then it too stirred, flipped itself over and flew away. I was puzzled but figured I’d best make the call anyway. As I started to dial, I woke up.
Posted by Dale at 8:43 AM 27 comments

Labels: dreams, I like dreaming cause dreaming can make you mine, the dream never dies just the dreamer, where have I been?
Share |
Newer Posts Older Posts Home
Subscribe to: Posts (Atom)
Copyright: 2004 to Infinity + 1