The Make Up Sex Should Be Awesome!

The unthinkable has happened - I've broken up with the Korean Bagel Lady! Before you leave me for dead, please hear my tale and then judge.

Last week on a work day filled with unsanctioned breaks and work avoidance, Jessica and I stopped to kibbitz with everyone's favourite bagel lady and get a cup of coffee. From there, we headed for the parkette outside the building to take our places on a bench warmed by spring sunlight.

We chatted a bit and I took a sip of my coffee. That's not right I thought, it must be the gum in my mouth. I went ahead and took a bigger sip and thought that weird taste can't just be from my gum. I asked Jessica to try hers and she did a brilliant spit take followed by a rapid fire: That's awful, there's something wrong with this coffee! Tastes like there's something in it that shouldn't be.

Seconds later, my tongue was tingling and my lips felt numb. This was more than just the heady thrill of being outside for the first time in months without a jacket, this was from coffee most foul. We headed back inside and approached the scene of the crime with caution.

After treading through our explanation, the Bagel Lady asked So, maybe coffee is too weak? No, it's not weak, there's a chemical taste to it, I said. No use any chemical, only clean machine Fridays with safe "cleaning" that company give me (she owns a franchise).

Maybe coffee too strong? she continued. Quickly becoming exasperated, I said No, it's not too strong, it's not too weak, but it's definitely not just right, there's something wrong with it! She scowled and said Here, let me see - which one Jessica and not yours? She took a swig from her cup and looking more sour than usual found her breakthrough moment. Yes, it bad, she declared.

You'd better throw out the rest of that pot before someone else drinks it, Jessica said. Skipping over this point she went straight to You want free coffee? Here, I give. She was about to pour a new cup out of the same pot. You can't serve the rest of that coffee!, we chastised, there's something wrong with it!. She acquiesced and disposed of the rancid brew. She then told us to wait while she made a fresh pot.

We compared symptoms and wondered what our livers were about to start trying to process until the new brew was ready. We hesitantly poured and went for the milk. It was empty. You're out of milk I said. Here, new one. As soon as it hit the hot coffee, the milk curdled. I can't take any more of this, let's just go, Jessica said. We told her we'd decided to pass on the idea of coffee today and she countered with Come back tomorrow, I give you free one!

Within a half hour, my head was pounding. I'm getting a headache now I called over the partition separating my deluxe cubicle from Jessica's. So am I. We shared some Advil and started drinking lots of water.

When I got home that evening, I brushed my teeth and tongue several times but the funny taste/feeling lasted right through to the next day. Jessica had enjoyed her evening even more after spending part of it throwing up.

We went back to our would be executioner and told her about it. She at first tried to say that we were just thinking about it too much and that's why we felt funny, you imagine it. When she saw that we were about to reach over the counter and brain her, she said she'd isolated the rest of the bags of coffee from that batch and opened a new case. She also called the company to test the coffee. Free one? she asked. We declined.

She refused to agree that there was any sort of chemical involved although my thoughts went to her long ago claims to having put bleach and CLR in my coffee. My guess is that maybe she did clean the pot out with something and forgot to rinse it.

I haven't been back since. I've walked by a few times and tried to avoid her icy stare. My response has been to just smile back while shielding her competitor's coffee cup from view. I know that sooner more likely than later, my body will betray me and demand bacon on one of her damned cheese bagels and I'll be back, but for now, I'm just biding my tongue time. I know which side my bagel's buttered on!

PS: While I have broken up with her, I haven't forgotten you my lovely readers and commenters. I've just been very busy. As soon as I have time, I'll break up with you properly.
Posted by Dale at 7:49 PM 45 comments

Ah, spring. The plastic bags are in the trees, the sun is shining like it means to stay and my neighbor Honeypot has emerged from hibernation.

In less than a week, the old gal has played hostess to four spectacular backyard fires and is a definite shoe in to re-light that pesky torch should the I.O.C. run into any more trouble.

She's also been busy spring cleaning. How can I tell? Several garbage bags await rescue and as it's a week early for pick up, milady has made sure they have some company. The couch formerly gracing the backyard may have witnessed one startling romp too many and has been dragged curbside. The sight just brightens the whole neighborhood. 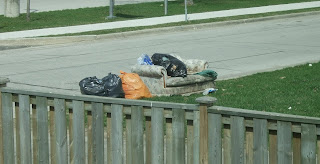 Not having a clothesline hasn't stopped my Honeypot from hanging her clothes out either. Eaves troughs until now have been too singularly purposed don't you think? It may not be evident from my surveillance photo but be assured, there are several sweatshirts in her signature red hanging just above that old pot, not unlike the way they hang on her. 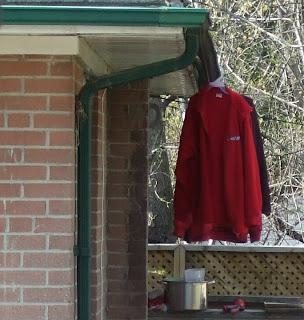 I think I've asked this before but now I'm pleading, won't you be my neighbor?
Posted by Dale at 5:46 PM 47 comments

Labels: Garbage, have I ever been on the right side of the tracks?, Honeypot, neighbors, they oughta take a rope and hang me
Share |

One thing I enjoy about living in the big city is judging categorizing people based on their looks as I walk by them. Although I've no proof that any of my guesses are correct, I'm convinced they are.

Look! There goes a harried single mom, someone else who's one bad decision away from being homeless, a heart attack waiting to happen, a chronic masturbator, a model slash actress, a diddler, and a bouncer who needs to get off the 'roids. There are eight million stories in the naked city but I've only got time for one, this is rush hour.

Each morning walking through Union Station, I see a man standing in the same spot, cellphone to his ear. Something about the way he's dressed and the life's beaten me down look he wears tells me he's busy placing bets with a bookie. I've passed him nearly every day for a couple of years so I should know.

A few days ago I slowed down and went to put my newspaper in the recycling bin near where he stands and finally overheard him conducting this piece of nasty business: "I just wanted to make sure you were up honey, hope you have a wonderful day, I love you very much". My guess is that he calls the bookie right after that. In fact, I'd bet on it.
Posted by Dale at 6:58 AM 36 comments

All week long, I've been stealing the signs in our building announcing the Theft and Fraud Awareness seminar scheduled for next week. Nobody's come for me yet, I'm a little disappointed. 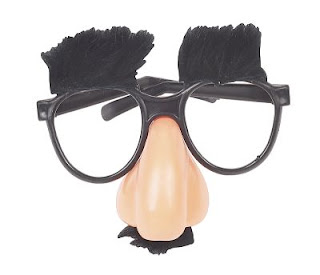 In other news, our local information channel with the sexy ticker type display let me down today. As a Canadian, it is important that I have up to the minute weather information without having to look through the window next to the television.

The damned thing was stuck going back and forth announcing the times for sunrise and sunset over and over, useful perhaps if I still had my dream of someday starring in Fiddler on the Roof but no help to me should I end up in a small talk situation today. The horror.
Posted by Dale at 12:35 PM 34 comments

Why I Love British Telly

This first bit I saw on Allison's blog and it kept me laughing through the day yesterday. It's from a show called The F Word with Gordon Ramsay. Ricky Gervais is the guest diner.

Why can't North American chat shows be more like The Graham Norton Show? I first heard of him on Melinda June's blog and I believe Gifted Typist has mentioned him as well. I think he was featured on the Kathy Griffin D-List episode when she went to London too. I've seen two episodes on BBC Canada but it only took one to hook me.

While it's true that here in Canadaland gumdrops and health care are free, it follows that you must generally do something stupid to get that free health care (the gumdrops you can just pick off the trees).
A few weeks ago, I was lamenting not being able to hold dance classes on the back deck as it was still covered with white stuff snow. My brain, being the underused entity that it is, told me I should get a bit of exercise and shovel the damned stuff onto the lawn before my dreams collapsed along with the deck.
I cleared most of it away and was ready to sign up new students when a couple of days later, the phrase pain in the neck took on a meaning I'd not previously understood. The act of turning my head even slightly sent shock waves through me as the spasms took over. I called on my brain for solutions and all it could come up with was I bet you could score some good drugs out of this.
As I'm in the process of breaking up with my own doctor because I can never reach him (he never seems to be free), I went to one of those tiny magical kingdoms known as a walk-in clinic. The doctor there took one look at me and suggested some medication, an x-ray and some physiotherapy. (Treatment and muscle relaxants are not quite as free as everything else but my plan at work covers me with a thousand sweet kisses).

When the lovely therapist saw how incredibly stiff I was, she tried some manipulation and then asked if I'd ever tried acupuncture. Well, stick a needle in me - I'd never thought of it but was willing to try nearly anything for a bit of relief.

After one session, the difference was quite remarkable. A few more visits and I'm a very happy and pain free fellow. At my last session, the therapist said "I think I'm going to give you a soft discharge", a phrase more fraught with meaning than this entire recounting. My eyebrow raised as I thought "that's gotta cost extra!" but she continued on - "That means you don't need to come back unless you have a flare up but if you do, your file is open and you can just book an appointment and I'll fix you right up".

No longer sitting on pins and needles about the potential for big pain from channeling Amy Winehouse while shaking my head and saying No No No to the Korean Bagel Lady's advances, once again I am ready to rumble rhumba!