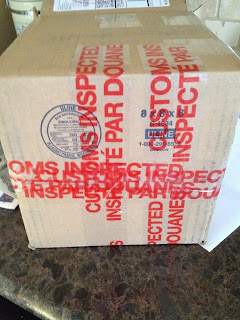 Evidently the Canadian cheese cartel wasted no time after the announcement of the new domestic cheese protection laws, in donning their brass knuckles and smashing your new mug, Just because they can.

I'm glad it was just the coffee mug and not my other mug Barbara!

1. When cheese turns black, I usually pitch it. The last thing I do is order it from abroad.

2. Hope you didn't eventually get that bill. But if you did, at least you got something nice on Christmas Eve.

X. Dell! You'd like this black cheese, just not the import duties. Thankfully, I didn't get the bill after all. It'd be cheaper to just fly to the US and pick some up next time!

It's luck of the draw, how hard Canada Customs screws you over. But it's always unfair.

Dale....? You haven't posted since January. Did the cheese kill you?
Did Canada Customs kill you?!

Where's the latest from Dale? This hiatus is unacceptable!

Thank you for nice information
I'm happy to find it here, here and here

Hello. Such a nice post! I’m really appreciate it. It will be great if you’ll read my first article on Unimuda Sorong and uhamka

Thank you for nice information. Please visit our web: