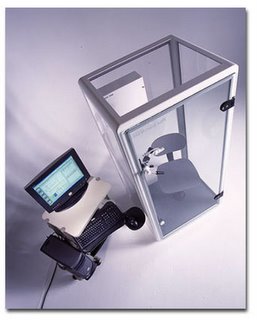 So just like most people on a Friday afternoon in November, I found myself doing a pulmonary function test and sitting in this little isolation booth. The test was ordered because of some lingering bronchitis issues I was having. Honest, I never felt worse than after quitting smoking!

The technician is outside and speaking into a microphone and her voice comes through a tiny speaker. Her dulcet tones in broken English talk you through the different types of breathing they want you to do into the tube. What fun. In between instructions, I'm sizing up my little isolation booth and spy the nameplate affixed to the glass: Bodybox 5500.

Now is that a name to inspire confidence that I'll make it back out of there? Instead of calling my little glass coffin that, couldn't they had named it the Wheezemaster? Or Rasp-o-Matic, that would have worked too.

There was also a small sign on the wall outside the booth that said to be careful when sitting as chairs can slip out easily. I think it's discernible from the photo that the chair is bolted down to the floor. None of the chairs in the lab had casters. Huh? is all I can say to that.

As much fun as medical testing can be, I do hope to now stop documenting the folly surrounding mine.
Posted by Dale at 1:39 PM