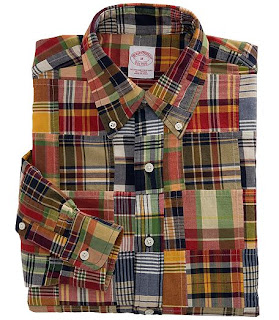 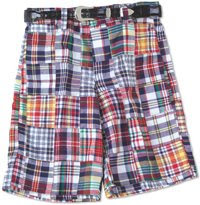 Labels: Brooks Brothers shame on you, fashion, flush the fashion, hideous kinky, madras, random thoughts, what are you looking at?
Share |

One man's madras is another man's... madras.

Give it up - it is the fabric of yesterday, tomorrow and today!

Thems ugly. My daughter has Converse like that though and they are cute. But, she's 15.

didn't our grandmas make bedquilts out of this stuff 'cuz it was basically bits of mixed scraps?

Wear it, but wear it as underwear.

Well there goes 93% of my fucking summer wardrobe. Thanks a ton. Could you have told me sooner?

My roommate has a pair of shorts that look an awful lot like those. I...have borrowed them.

I just bought a skirt from Ann Taylor that is a patriotic Madras pattern. When I wear it, I'll take a pic and send it to you. Maybe it will change your mind.

I have a speedo made out of that I wear to the beach.

You mean they make those on purpose? And there's a NAME for them? Geesh.

Remind me to stay away from the beach on Pistols Goes to the Beach day.

I never got into madras. For a long time I felt left out; now you have given me reason to hope.

I saw a woman wearing a madras skirt today. She looked...nice.

I'd think it'd be kinda cool if the people who wore such clothing gave me acid while I looked at it.

That stuff looks great! Often, I've seen a crappy tablecloth and wondered where that table shops - now I know.

Wow Suze, have you ever really noticed your hands? I mean really looked at them? Wow.

Fran, come a little bit closer, I have scissors.

Even then it's hideous MichaelG but mostly because it's a clown. Aieee!

At 15, nearly everything is excusable Lori.

A smashing idea Cap'n and then nobody has to look at it, unless you only wear your underwear everywhere.

Falwless, we need someone to point our derision at and it's your turn.

You should send one photo with you wearing the skirt and one without Valerie, you know, for comparison's sake.

Skyler's Dad, you are a sexy bitch!

I think it'll be a party for one that day on the beach Chris. We'll spy on him and sell the photos.

In the first case, it's a matter of spelling and perhaps alignment Beckeye, in the second, well pour me another and we'll talk.

She possibly was being attacked by it Grant Miller and you failed at not wrestling them both to the ground to see.

A much better idea X. Dell. Acid goes so well with just about everything.

That may be where the expression "He's got the brains God gave a table" comes from Pistols.

when I went to high school in New England, lots of people wore stuff like that. I never knew what it was called.

I'm here to tell you, no amount of acid would make this look good. This is the kind of nightmare Scotsmen have after too much hagus and single malt whiskey.

It is the kind of thing that makes a chameleons explode, while fashion designers rub their hands together, know full well that they can sell anything.

It think they call that fashion
"car crash chic"

Madras is so new england. I'm thinking I don't miss that much, or the flannel and the LL bean clogs and fleece. Oh and those damn thermal Henley's and turtle necks and sweaters with patches on the elbows.

Hey! Who made shorts out of my tea towels?

Those madras shorts kinda turn me on.

Shit, even my Grampa wouldn't wear those...isn't that who those kinds of clothes are for, too? ugh.

As far as I'm concerned, this is just the affluent and the aspiringly affluent's way of annoyin the rest of us.

Seriously, with a name like that, the fabric and pattern had to have originated in India, yet I've never seen an Indian that wasn't worth mid to high six-figures wearing something with this pattern. Why? Because the rest of the populace was so annoyed, they ran them out of town with torches and pitchforks.

i am sending you all my madras shirts from the 70s

But it looks so lovely in the midst of a shag spin, all those pretty colors swirling around those preppy hips ...

See why you need me Chancelucky?

You're a wise man Doc, I'll drink to that!

I always thought you were a woman who didn't miss much Bluez.

I don't know Barbara but I'd check on your afghans too in case they end up with buttons on them.

They turn you on Melly? This might be reason enough to cut the tag off!

Thank you Sans, you're a man of reason.

Madras pants are probably one of the worst things that ever happened.

i had no idea that was what madras was. how awful.

I agree Neutron, thank you for seeing things my way.

You're a woman of intelligence and many other things Gizmorox.

I was reminded of the post yesterday when I saw a man wearing a madras sport coat. But he was Indian. Possily from Madras. Does he get a pass, or is that still verboten?

this clothes are soo horrible that i have to actually agree with you Dale!(I think this is only the second time it happen)

Still not okay 3vil Genius. I'm a tough bastard on the topic.

Lightning can strike twice Jill. I'm glad you're getting smarter every day.

You are so damn nice, Dale!