My fudge still hasn't arrived but I've no time to worry about that because something pretty spectacular showed up in today's post and it's been distracting me all day.
A while back, Jen from Casual Slack and Amy from Mish Mash came up with a game of blog tag but of the sort that requires you to go postal.
Amy's original card to Jen is a masterpiece nearly defying description.  It's now been seen in person by several bloggers, each who has added their own touches to it.  The card's been on tour through America and recently spent time in Scotland and Australia and it's now made it to the Great White North and into my grubby Canadian hands.
If you'd like to be the next recipient of this work of art in progress, leave me a comment and I'll add something to it and it'll be on the next leg of the journey.
The present incarnation of the card looks a little something like this.
The original card from Amy to Jen with additions by Jen, Chris and Miss Alex 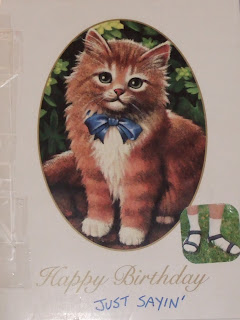 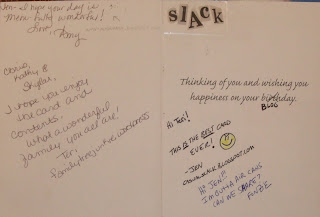 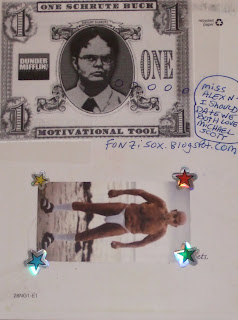 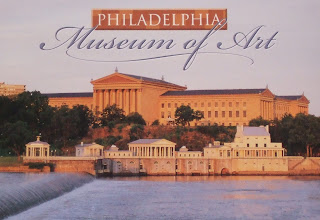 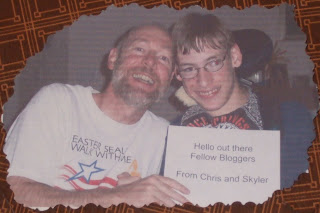 Another lovely pussy card!
Nobody added a note and the back of the card is by Midleah 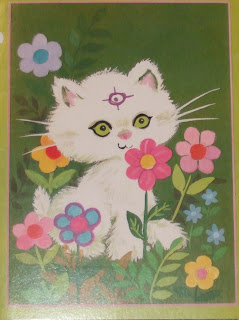 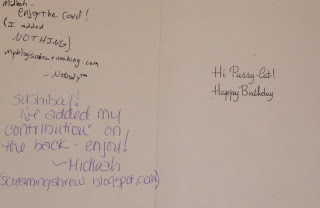 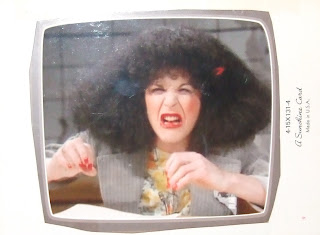 Sushiboy's card with nutritional and hilarious snack on the back, additional message from Sans Pantaloons inside 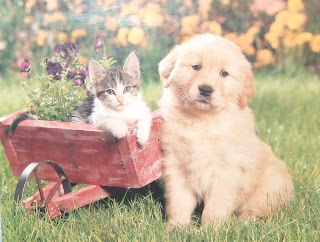 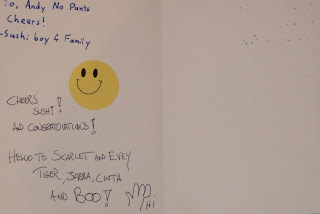 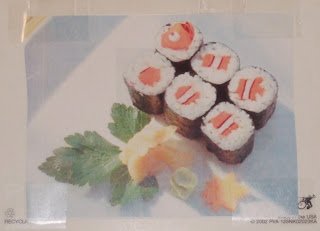 Sans shows off his hypnotic eyes, rhyming prowess and ripped bod.  Additional message inside by Scarlet (turn monitor upside down to read) and some hilarious card back antics from Sans 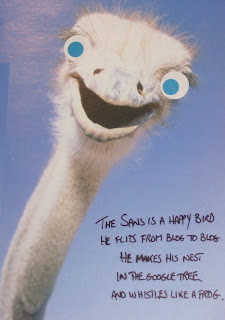 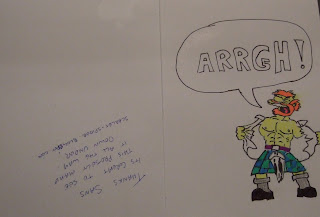 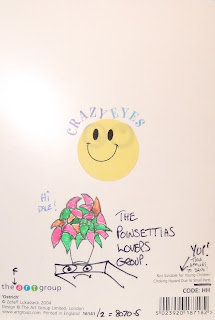 Some lovely scenes of Australia courtesy of Scarlet and family and a message on the back, have a look at the upper left corner of that postcard- yikes! 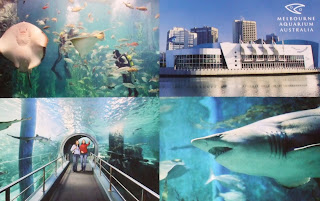 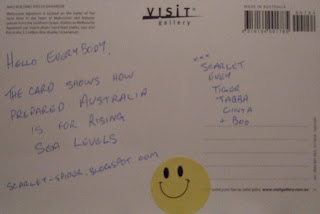 The paint's almost dry on my addition to things but first let me recap Jen and Amy's official rules:
Official rules & regulations:
• When You Get "The Card"post a photograph/scan of it's arrival & contents
• Ask readers to leave a comment if they want the card next
• Pick the blogger who is worthy
• THEN add your name / url plus a nice message or creative addition to the card
• Include a copy of the official rules with the card
• Send it on it's way to the next worthy recipient
• Send it out fast..
- no putting it on the mantle an admiring it for 3 weeks...
• Can a blogger who has already received the card - be sent the card again? - Yes!
• What if there is no room left on the card? -ADD A NEW PAGE - IT'S NOT ROCKET SCIENCE!
So?  Any takers? You know you waaaant it...
Posted by Dale at 12:07 PM

Glad it made your way! Can't wait to see where it goes next.

I will give you your mom's much anticipated package if you let me have it next!!

I'm SOOOO not worthy 'cuz I'm in a major-mega creative schlumpp. Send it to Flann. She's got Girls who can do some creative wonders and she's good at drawing groundhogs.

I don't have any lobbyists like Flannery does, not do I have Schrute bucks, but I will give you my first-born for the card. Admit it, you want a messy, lazy, but dead funny, 17-year-old around the house.

Just heard from a mystery blogger it is your birthday!

very, very cool. I have an extensive postcard collection and could make some interesting additions but I don't have a scanner and am a lazy photographer. But it's a wicked awesome idea.

Happy Birthday you rascal! I can only hope someone took you out for drinks and you did something naughty. Forgive me, but I have an impish side that hopes you managed a few new regrets for your birthday. You know, the kinds of things that would make you pay extortion money to keep hush-hush.

As for the cards, Flannery and I will be very hurt if this passes us by. I have a lurid cartoon planned and Flan is knitting an obscene pot-holder for the occasion. I hope you like it. It has lots of flesh-tones and sequins. After all, you deserve the very best.

lookin' good! nice to see this is still traveling around the blogosphere.

holygod, that is amazing! Must have it!

Oh, is it your birthday?

Some really nice cards here. Thanks for visiting.

I don't understand this post. This may be partially attributable to the fact that I only looked at the pictures.

That sort of dilutes the "Genius" of your name, doesn't it?

I'd offer to play but I don't want anything in my house that Sushiboy has touched.

Tanya said it is your birthday!

Well it was. What can I tell you- I'm late. At least in this case that does not mean I am pregnant with your child, so rejoice dear Dale!

Oh yeah, and Happy Birthday and all that stuff!

I soooooooo want it! Wait, what do I have to do? hehehe Let me know!!
I am off to connect with Teri who had the post card from the Philly art museum! Its right in my neck of the woods!

Cheers to you Dale!

BTW, how long does fudge last?

The card is on its way! I won't say where but I'll be keeping my good eye open to see when it lands and then where it flies from there. I'm just happy that Canada had a crack at this piece of living and growing art.

Oh, and thank you all for the birthday wishes. I may be 45 but I don't look a day over 44 and several hundred days!

Maybe I'll start my own if I don't get added to the sendy list...

errr... I think I an pretty far down the list of potential recipients at this point, though maybe if I call in some favours with my contact at Canada post some of the mail might just get "redirected" - muhahahahahaha (insert evil laugh).

If this doesn't work, I'll happy wait until 2012 to add my page - though I imagine the postage for what will probably be a 10 lb letter by that point might be a little steep.

I always forget that Teri's from Philly.