Things That Come To A Head

Have you ever head someone say on the news that a criminal has been sent for 30 days observation at a psychiatric hospital? That’s where my Dad worked, on a hospital ward for the criminally insane. It was often joked that this is where he got us kids from. I didn’t find this particularly funny because I'm pretty sure it was true.

Now and then, a spirited lunatic would charge at my Dad screaming bloody murder and brandishing stolen cutlery or hoisting a chair overhead ready to take him out and make a run for it. These attacks were easily thwarted, mostly because of the excellent warning system of a lunatic screaming as he charges.

The hospital provided temporary shelter to the 30 day crowd but also had lifers on the premises. Many of them were allowed out on supervised walks through town while others were given the barbed wire treatment and limited to the grounds. A select few were considered to no longer be a risk and they were allowed outside the fence which never made much sense to me.

Outside the fence was a playground. The playground backed onto one of two entrances to a trail that led up a mountain overlooking my town. 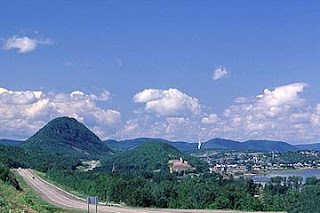 The mountain was a nice hike with an elevation of 1000 feet, enough of an accomplishment to not completely wear you out and a great enough view to make it worth the climb.

On summer days when we’d sufficiently tortured our parents and the smaller neighborhood children, my friends and I would sometimes make our way over to the swings behind the hospital and debate climbing the mountain. We’d often see a few of the less dangerous patients wandering around outside the fence and although they never really bothered us, we kept a wary eye on them.

Only one of these fellows ever came up to us. His name was Jack and apart from the constant darting of his eyes, he seemed a nice enough chap. He’d ask us our names, wonder if we were going up the mountain and then be on his way. Behind his back, we called him Mad Jack after my father told me why he was a guest of the hospital. He had killed both of his parents when he was a teenager but never gave anyone a reason. He was now in his late fifties and regarded as harmless with several years of good behaviour under his belt.

When the mountain called our names one summer afternoon, the gang and I set out to conquer it again. One of the guys was well ahead of us and out of sight for a short time. He came bounding down to us a few moments later excitedly telling us Mad Jack is up ahead on the trail and has a case of beer hidden in the woods, let's go!!

We were all about 14 or so years old and I think it may have been one of the first times I’d offered an opinion I could be proud of. Are you fucking crazy? He’s a fucking mental patient! Where do you think he got the case of beer? Do you think he carted it through town past the hospital and up into the woods? Are you sure you’re not fucking mental? My friend decided that maybe his reasoning was a bit faulty although he scored points for willingness to share. We continued up the trail and there was Jack waiting patiently for us, all eyes and anticipation. Hi guys! Want to come and have some beer? My friend answered No thanks while I gave him the best stink eye I could manage and we went on our way.

We made fun of our friend but eventually let it slide as other concerns began to dot our horizons, like the usual complaints about the school year getting ready to assault us. It all came back to the surface quickly though as one day, my father arrived home with exciting news. Mad Jack had lured a fellow patient into the woods promising him beer and then bashed his skull in killing him!

As I breathlessly told my Dad about our encounter with Mad Jack a few weeks earlier on the trail, his eyes widened at our near brush with disaster and he began to shake his head in disbelief. Now where would he have thought a mental patient would get a case of beer?!

Mad Jack ended up back in maximum lock up where he died a few years later. I ended up here.
Posted by Dale at 3:57 PM

Here is a good place, Dale.

That story made my ass twitch with fear and made me bubble over with giggles at the same time. You master storyteller, you.

And my mom worked in a psychiatric ward for a while after she got laid off from her accounting gig of 24 years (damn utility companies). Anywho, I was teaching high school at that same time, and our stories were strikingly similar.

Yeah, you ended up here, with old Korean ladies offering you bagels.

Great post Dale. I can see the 30 day observation ward and the adjoining playground really clearly with all that the pairing implies.

btw, saw the movie Running with Scissors which you mentioned here a while ago. Mostly hated the movie, but I see why you think of it as similar material to some of your childhood stuff. Honestly, yours seems more interesting and potentially would make better fiction.
Running with Scissors felt like one of those memoirs that was publishable only because it sounded so crazy and that would be the case only if you happened to believe it actually happened that way. Had it been fiction, I don't think it would have been credible. Your stuff has much more dimension, should you ever care to go there :}.

umm, heading up the mountain?

It's not so bad most of the time Ten. S. As long as you keep playing gee-tar!

Your comment mad me bubble over Andi. I can see exactly how high school and a psych ward are parallel universes.

Yeah Tanya but if she offers me a case of them, I'm getting the hell outta there!

I just saw Running With Scissors too Chancelucky and was surprised that Augusten Burroughs was happy with it considering the changes of some key character elements from the book. Annette Bening was pretty convincing, should I ask her to star in one of my posts? Thanks for the lovely comment.

I can name that tune in 2 bashes to the head Justacoolcat.

Yowza! That gave me chills, it did!

You know what's scary? I don't think I would have had the sense at 14 to reason it out the way you did. You was the man!

Glad you're here Dale. Nothing good comes from underage drinking with a mental patient in the woods. Trust me.

Good gravy, man, I was kidding abou the Labatt's! Dang, you Canadians take your beer seriously.

Awesome story, dude. The exposition, the plot development, the twist at the end. Fascinating.

I wonder why, after all that time, Mad Jack decided to kill again.

The story reminds me of my mother, who worked for many years as a psychiatric nurse at the local Veterans Administration. There were a number of violent encounters between staff and patients flashing back--either to the battlefield or the drug-taking experiments they participated in.

But mom never said anything about them having beer.

Dale, congratulations on your release! It's fun on this side of the fence, though not always as colorful.

The first few paragraphs of your little story eerily reminds me of holidays with my family.

I must have had some sort of built in caution system from listening to my dad Barbara.

Bubs, I completely trust you on this one. And on most other matters as well.

If there's beer to be had, a quick pros vs cons thing has to occur Write Procrastinator.

I'd like to know what set him off too X. Dell, the reports might be interesting to see. You mom was keeping the beer to herself, she didn't want to set a bad example.

You figured it out that easily CP? If I ever hear you singing Gimme Shelter I'm sending a van and special jacket for you. Families are mental. Every one of them.

You know, where I come from we refer to your anus as the "stink eye".
I guessing this isn't what you showed him, although it would explain the hidden beer.

Boy, who'd ever think that accepting a beer from a mental patient could be the difference between life and death? Glad you chose to ignore your desire for that frosty amber nectar. That reminds me I need to pick up some beer on the way home.

Geez, what a story! At least you had some sense.

I knew hiking could never amount to anything good.

Damn cool story; talk about your beer hangovers. Glad you had some sense about you, Dale.

You're the only one I showed Skincarver and you said you wouldn't tell!

Hiking is clearly the root of many evils Allison.

It's probably the only sensible thing I did as a kid Beth. Except grow up.

Holy crap Dale! That's pretty freaky! You have the best stories and way of telling them. You should write a short novel about your childhood. I would buy it! But you better sign my copy :O)

That's scary as hell! Beer really is the root of all evil!

Mmm he must've needed killin, mmm. Gimme one of dem biscuits wit some mustard on it. Mmm.

I'm not following a crazy person into the woods for beer. Pinot Noir, maybe. But beer? Certainly not.

What can I say Giz? Some beer bashes just go bad.

Back away from the comments Old Lady. You're scaring me and making me laugh.

Ah, excellent choice Chelene. You always know the right thing to say when you're staring crazy in the face I see.

holy shit, dale. that's one hell of a yarn. you are so lucky! terrifying. I got the chills and awl.