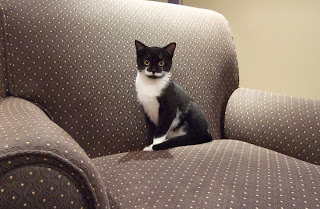 What a sweet baby!

I know Chris, it's all over but more and more awwwwing.

I'm a big baby Fran, she's a little one.

But you'd do that anyway right Dr. Zibbs? Are you available for hire?

She's melting? I'm melting! Oh and while we're at it she'll make short work of that chair. Damn vets discourage declawing these days...I think they're full of it.

Can Rizzo shimmy down the drainpipe?

No lie CP, about 40 seconds after I read your comment, she went to town on the matching chair to the one in the photo. Good times.

No problem Lori, with mad rhyming skillz like that, you're getting mittens and possibly a lucky cat foot!

Ok, ok, I'll find a dog next Allison. Used to have one actually but he's a goner unfortunately.

Not yet Beckeye but she looks killer in the outfit!

Could you knit me a touque instead of mittens, please? A full face touque with a little Hitler moustache would be most suitable, I think.

Somehow, I knew this would happen.

That cage/food set-up is exactly how I caught my husband. Although I don't let him sit on the furniture.

We had a black and white cat for years. He was mean as hell. I hope Rizzo doesn't end up looking like our 26 pound cat did. Rest in peace Fatboy. She has his exact face (minus 20 pounds of flubbah)

The white stripe on her lips makes her look like Kaiser Wilhelm. Too cute.

"She will hiss if I make too rapid an approach but one touch and she melts into a purr measuring just under the rumble of a tractor."

I'd make a joke, but I'll be served with divorce papers if I do.

She only wanted to send me to my death for the first day or two Barbara, she seems kinder now. The toque is a good idea, I'll put the kids in the back to work.

I knew too X. Dell, feed them once and it's all over.

That must be one hell of a litter box Suze! Good going.

She's less mean than wary Bluez. I hope she doesn't break the scales or it'll be off to Jenny Craig's house for her.

You can borrow her next time you're in the Americas Lulu as long as she hasn't killed me by that time. I had a feeling that you too were a cat whisperer.

Should I make up a calendar of her in costumes Doc? Please don't make me.

Stay together for the sake of the kitten Cormac.

That picture looks like it was taken at stately Kitty Manor.

Having gotten my stray kitten adoptin' on just a couple of months ago, I'm warmed by this post. What a pretty, pretty kitteh. You are now required to take photos of kitten in various amusing poses and then have a lolcat caption contest. I'm pretty sure it's the law. Get snappin'.

Oh jeez, there you go with the cat posts.

That cat is more photogenic than me. Humph.

(I also like that chair, Dale. By the way, check your email. I'm sending you a missive.)

That cat is staring directly into my soul and judging me.

Are you sure it shouldn't be named Hitler?

Do you have mittens in black, white, and black and white?
I take it this poor kitten is now going to be part of this blog, maybe even purring for some of the audio podcasts, etc.
next it'll be Chrismtas cards featuring the ever growing Rizzo...then every third post will be about cute things that Rizzo did or didn't do.

Dale, you never told us you were such a talented portaiturist.

Thank you for the Dali props Flannery, I'll pass that on if she'll let a peasant like me back into stately Kitty Manor, haha.

But what would become of my blog dedicated purely to academic pursuits Falwless? I'm reading up on the law right now. And congrats on your own warm feeling. It's nice when it's not just pee running down your leg like that one time right?

Once I get her into playing Guitar Hero with me Creepy, things should improve around here.

You should see the chairs upstairs Chelene, they're more photogenic than all of us! Good to hear from you!

We all are Pistols at Dawn, we all are. All the time.

She's too soft to be Hitler, Leonesse.

I know Winter, it's all too much.

You must have a claws in your contract that made you say that Grant Miller.

If necessary I could always drape her around your neck to really set off the look Kat.

Another vote for Dali! Thanks Cap'n, you're on the Christmas card list for that.

I plan to blog now on things only that she can't or won't do and my resulting disappointment Chancelucky, it's going to be despair all the time.

The secret to great portraiture Gifted Typist - never use people, turn off the flash to avoid the creepy eye and take between 120 to 14,000 photos and at least one will look decent. You're welcome.

Is this a "picture of the day"?

Can I get the palms white and top of the mittens black?

Careful Sandra! If it ended up there, the fallout would be extreme! Haha, a couple of people asked me that and then we all laughed about the people who send the cat and dog photos. I was ready to call Animal Protection Services the other day on the owners of that retarded white dog one and then the out of focus husky yesterday.

Your order has been received Genn6. If you have already sent your payment, please disregard this comment.

She's a cutie! One of my cats was feral. Well, living with me, he's still in a bit of a feral environment.

Haha Beth, he'll tame you before you tame him then.