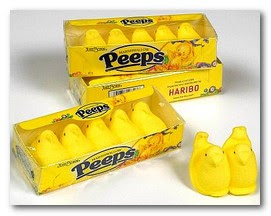 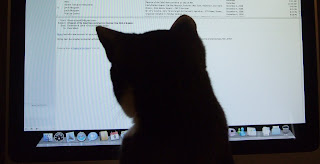 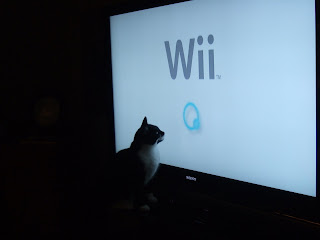 One more time: Happy Easter Peeps!
Posted by Dale at 10:43 AM

Labels: Chelsea Handler, Easter, peeps, pretty unfly for a white guy, random thoughts, Rizzo, why blame yourself for not blogging when you can blame the cat?, Wii
Share |

Looks like Rizzo is looking to score some cat nip via the internet. Be careful and don't leave your credit card laying about.

Try microwaving your Peeps for a good time!

I love your cat pictures!

That cat is planning something...

Rizzo probably figures that she could take Chuy down and feed on him.

My cousin just dropped a Wii off last night for the birthdays of the Brown men, more procrastination awaits.

great shot .. happy easter to you to ,, may you get lots of chocolate

Peeps are evil, Dale. They are planning something and I don't like it. Little over sugary effers.

Incidentally, I tried the TH key lime doughnut! You were right. Disappointing. I now bow down to your supreme, superior knowledge of all things. (except Peeps)

Rizzo and I are similar. Damn Wii takes so long for the answers.

Much like you, I am much too white to use the term "peeps". It is the same reason I had to quit using the phrase "funky fresh" and "chitlin's". They wouldn't even print my letter to the editor in Ebony magizine. I'm so white I can't even ask for a black coffee without whispers of "Mandingo" from the counter girl.

You have either got one big-assed tv screen or the world's smallest cat. Happy Zombie Jesus weekend!

Your Peeps look pretty badass.... behind that vacant black dotted stare lies something diabolical I am sure.

For a Jewess, I love peeps, they're the campest part of Easter, in my opinion.

Happy Easter to you, ya huband and the "figure" in A and B.

No way is my dog getting my computer password - last time she got it, I found a lifetime's supply of Greenies on my porch.

We love our peeps here in the Yen household. My stepdaughter just microwaved and ate one.

does the cat own shares in Microsoft

Rizzo looks to be a very intelligent cat..but I think you need to get his eyes checked.

Why hasn't Rizzo replied to my e-mail?

Is that a came of cat and mouse and peeps

When Rizzo posts the high score on your favorite game, it's time to throw out he cat.

It's time to confess something Wings, I have never had a Peep(s)! I know of them but that's where it ends. Do I need help?

I can only imagine the goodness of watching one explode in a microwave and it'll keep me from popping Rizzo in there CP.

You should see the ones she takes of me Skyler's Dad!

Always with the furtive looks and closing of browser windows when I walk in the room Bubs, I'm worried.

She'd be less scared of Chuy than I would be Cormac. I was mad the contest to be Chuy's BFF wasn't open to Canadians, I wanted the free trip! Enjoy the Wii!

I had some excellent chocolate AC46, I hope you did too.

They sounded so right didn't they Vegetable Assassin? Maybe if they made their own doughnuts still rather than defrosting hockey pucks, we'd get somewhere.

Whispers of Mandingo - isn't that a coffee flavour Doc? You'll always be funky fresh to me.

The only people who say 'size doesn't matter' Barbara are men with small tvs!

It's the same behind my dead stare Mr. Walker, schemes a-plenty.

And to you Blue Beak! Do you come in a chocolate beaked version?

It's tough to do anything Mellowlee when she insists on typing along or plain old laying on the keyboard.

I love my cat and my tv Mob, not necessarily in that order. Eggs are on the list somewhere too.

Figures you'd mention the figures Katie! One day, we'll have to break Peeps together on a high holy day.

They make Greenies for dogs too Lori? I'm sure they stole the idea from the cat version.

I'd like a video of how that looks Johnny Yen. I'm guessing that it's only to warm them and not explode them?

I think the cat's taking a beating with her investments as she will not discuss her portfolio at all Distributor Cap.

Her eyes are fine in real life, it's the soft glow of the tv making you worry Melly.

She loves you so much Beth but she does that to everyone.

It's a game she will win Gifted Typist, she's craftier than nearly any inanimate object in the house including me.

Threatening to put her back into the hedge where she came from seems to be working so far X. Dell.

Your cat's name is Rizzo? Oh my God, you have to invite me up for a weekend so I can bombard you with Grease quotes, puns, and references.

There are worse things your cat could do than read your email. (That's just a taste of what's to come.)

I have to come up anyway and give you a sound thrashing for cheating on me with Television Without Pity.

Haha, I think I may have made a few of those jokes about the cat Beckeye but you're welcome to come on up and pepper me and her with many more references. I told people I named her that (and I did) because at first she was all tough and standoffish but when you finally got at her, she rolled over and purred just like a real cat.

Don't tell me you got a cat? Poor thing!

You're calling me poor thing Jill? Or the cat? I think we're both better off now!