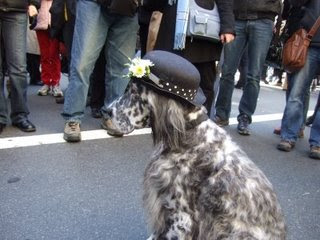 Next up it's back to the opera and rocking out with Metallica.
Posted by Dale at 5:39 PM

I saw Blithe Spirit in TO last time I was there, in the distillery district. Noel Coward, how I love thee.
Glad you had fun.

When Kathleen Turner did her star turn you should've immediately started yelling MIZ TURNER, MIZ TURNER! at the top of your lungs. That would've been hilarious.

Did you see any plastic-surgeries blogger celebrities, though? You know they could have gone toe-to-toe with Mister Turner at the star turn any day, because isn't that why we blog?

I think the dog needs a sweater vest. ;)

Wow, great report! And what a cute dog! I think I need more cute dog pictures on my blog. Hmmm, have to work on that.

I have approached celebs a couple of times, because I'm shameless. But that's just me.

I thought it might be too old tyme Gifted Typist but it was just a whole lot of fun!

I wish I'd thought of it Bubs. I reserve the right to do it next time.

It might sound rude to say Barbara (I know, how unlike me) but Mrs. Kirk could barely move her eyeballs since her face was pulled so tight.

She was brilliantly funny Flannery, get thee back to NYC!

The dog was so blase about the throngs of people taking his photo Allison. It was during the 'Easter Parade' where all manner of civilized and down right freaky people parade around in their hats.

I never think I'll have anything interesting to say to them so I shy away Esther. Maybe we should join forces? I'll spot them, you go up and wrangle them.

She was really the reason I went to that show GlassMeow and she didn't disappoint.

Don't get all green Ziggy, you could have easily chosen to move to a less far away continent!

I'd heard, way out here in California, that the smaller, limited run shows are carrying Broadway right now. I heard Gandolfini was great in his latest. I'm quite envious. Especially the part about Kathleen Turner...I have a job for her.

If the money's there, so may be Kathleen, Ms. Hahn. Go for it. Gandolfini was good but Marcia Gay Harden really blew me away.