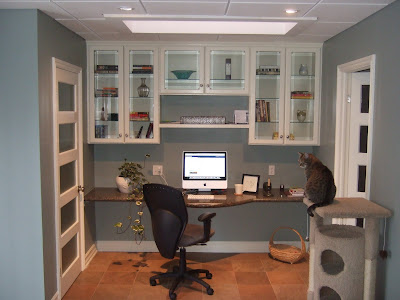 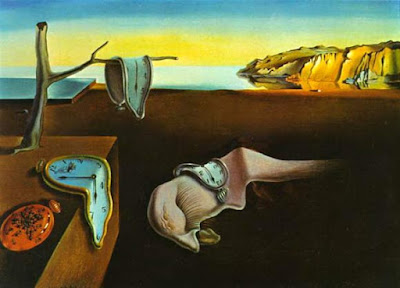 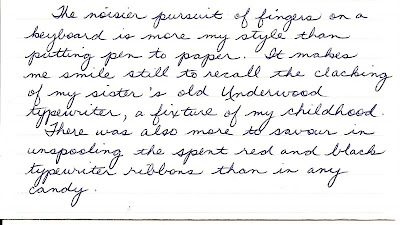 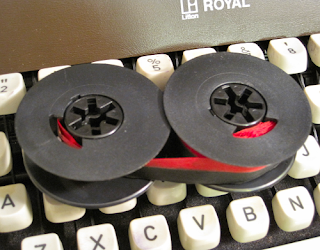 I'm definitely curious about where you write and what your writing looks like but my Canadian ways will not allow me to pressure you on the matter.  Do as you will, or won't.
Posted by Dale at 9:44 AM

You are entirely too organized my friend!

If I had those lovely built-ins and the world's tidiest desk, I too would have 33 drafts that never saw the light of day! I do, however, have grey walls. We're paint buddies!

If I were to partake in the exercise, it would be Russian novel length, since I write all over the house. I'm such a laptop whore.

I can't possibly show you were I write now, your writing space is far to organized!

This is a lovely idea though. I don't have a specific space at home, as I'm on the laptop - but I will partake in this exercise at work. After I clean my desk, of course. ;)

But my brain is uber messy Skyler's Dad!

You should see it already now that I took the photo Barbara, somehow there is a whole bunch more stuff laying around on it. The walls are mood coloured for sure depending on the light - grey, green, blue, it just depends. I appreciate your whoriness.

I almost feel bad now Allison. Maybe I should let it get all cluttered and do a reshoot. Believe me, it doesn't always look like that. I don't dare open the closet door to the left. It's a nightmare in there. I hope you do play along.

I'm so glad you did this. Your space is beautiful. I love those glass-front shelves.

As wonderful as the photos are, it was the words here that got to me. If you're ever looking for someone to beta read any of your drafts, give me a call. Or an email. No pressure.

Thanks for the nice comment and the offer too Lisa. I wasn't sure if I liked the glass at first or not. I find if I don't disturb anything, I don't have to clean them as often! Thanks again, your post really spurred me on.

Thanks for a peek into your world Dale! I'm like Barbara...there is no one location for me.

But maybe I'll try it and the handwriting thing. I'm sure you'll find it very difficult to read. You have lovely penmanship!

Well I found it all incredibly fascinating! Your tidy house belies your crazy brain and the same goes for your pretty handwriting, cleverly disguising your rapier wit and quirky danger.

Yikes, I should just profile people for the FBI or something, no? :)

My pleasure Flannery although I bet I can decipher your handwriting! Yes, that's a challenge.

You profiled me pretty good Vegetable Assassin and thanks for the handwriting idea to begin with. I'm all about contradictions so this post served me well!

I could show you where I'd write, but then I'd have to kill you.

Is that one of the cats that freeloaded you in posts of a bygone era? Have you adopted him/her?

Love the space. Now I feel bad that I assumed a cave and crayons were involved. I'm sorry.

I'm not sure how I got here or what this site is but I like it. I googled "what to look up now" and this came up on the first page. Strange? Maybe it's a message to tell me to tidy my desk and do something constructive.

Hi Anonymous! I like you liking the place. Have a look around, stay a while.