Torture At The Tower

Continuing my long tradition of giving 'til it hurts, I thought Bubs might be interested in this cheery little nook I happened upon at the Tower of London.

The Tower of London is actually a series of buildings, one housing the Crown Jewels and others offering their own delights. It was used as a fortress, a palace and a place to house prisoners. The Tower Bridge, often incorrectly identified as London Bridge is nearby. 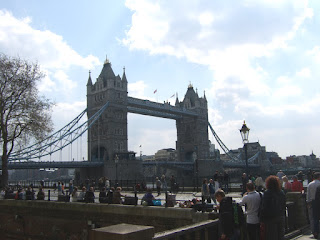 Off we go.
This doesn't look too imposing does it? 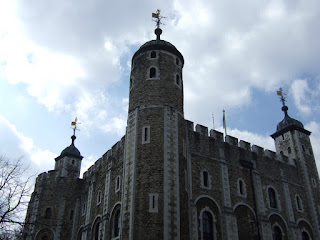 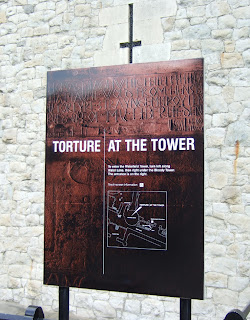 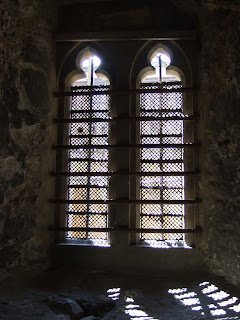 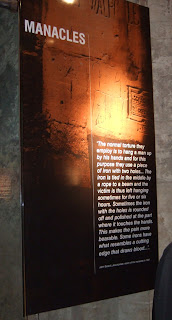 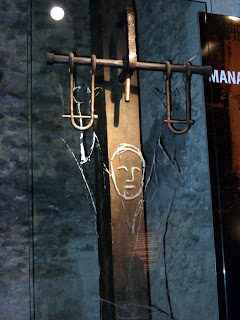 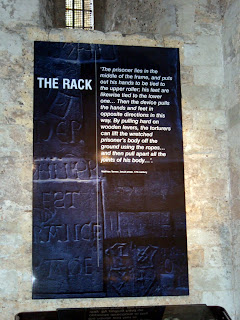 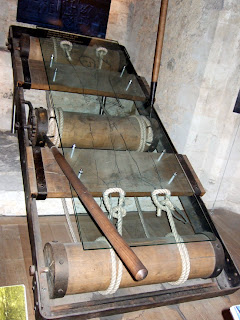 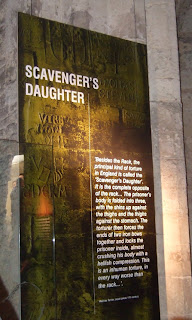 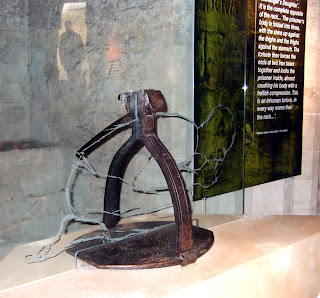 Other forms of torture on display at the castle include this fair maiden being forced to stand not only in a hot period costume but right next to a litter can robbing me of the cheap trash joke. Or did it? 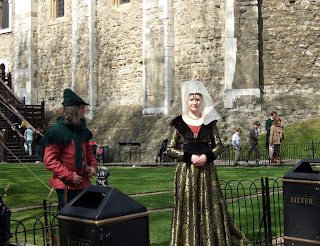 The torture exhibit was just a very small part of a fascinating place overall. After a long day of touring, you can probably figure what I was looking for though... 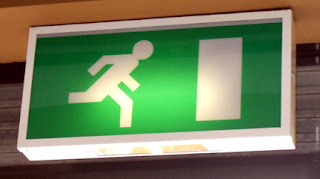 I thought of linking to the Royal website for the information on the Crown Jewels but something told me that someone would not be amused.
Posted by Dale at 5:42 PM

YOW. I had never heard of the "scavengers daughter" before. So, people in it would die of what we know today as positional asphyxia.

You certainly bring an appropriately cheery and Travel-Channel upbeat tone to your account. And I thought I was the only morbid bastard visiting these places for fun.

I missed the Tower due to an extreme hangover so thank you for your pictorial, Dale.

What, no Iron Maiden? No Catherine Wheel? Manacles?? That's hardly torture at all. I felt really bad for that woman in period costume though, having to put up with all the American trash all day.

(1) If you're worried about Queen Victoria, I don't think she would mind at all if you linked with her site.

(2) I see that the torture aspect of the Tower really struck your fancy. I can understand the fair maiden next to the trash can. After all, you take fair maidens wherever you can find them. But torture? none for me, please.

That one scared me the most too Bubs and the figures they've drawn in to help the screams curdle were pretty impressive. I'm all about the cheery and morbid. The whole Tower experience was amazing.

Shocking Chelene! :-) I've lots more photos if I ever resurrect my photo blog. I only seem to post the stranger ones here. Maybe I'll work on that soon. Or maybe I'll have a drink.

Try that Scavenger's Daughter out Fearless and get back to me. I'm afraid there's trash from every country everywhere I go.

I knew someone wouldn't let me get away with that X. Dell. The statues of her are enough to make me think she'd haunt a blog though. I'll pass on the actual torture too but the history everywhere was pretty spellbinding.

Ooh, I'm having a jealousygasm. I've always wanted to go there!

I'm still in love with that green exit sign. I suppose I have that to look forward to when I move over. Keep the photos coming, I enjoy learning of a culture through odd-ish pictures :)

I'm a Brit jealous of your visit - let us know more about what you think of the big smoke - the jealousygasm hasn't been reached yet, but if you start writing about London's record stores it welll might!

You being a bee want to be careful with the rapid drop of your kind back home....

I've never been. Had no idea they had weapons of torture. will have to take my boyfriend now and try them out...

I too, while not having a jelousygasm just yet, am envious of your trip to England and wearing my favorite "Fuck You" tie isn't even cheering me up.

How was the food?

Your coining of jealousygasm seems to be taking off Andi, and why wouldn't it really? It was a great trip.

I do actually take regular photos too Allison although odd-ish seems to be a part of my oeuvre.

Hi Danny, I did post a little bit here, here and then some more here. Overall, it was a wonderful trip, I popped in and out of a few record shops but spent most of my time immersing myself in the history and enjoyment of
-Windsor Castle
-Victoria & Albert Museum
-Churchill Museum & Cabinet War Rooms
-Tower of London
-The London Eye
-Hampton Court Palace
-The Royal Mews
-The Royal Opera
and a whole bunch of other places. It was a pretty full trip and I'd go back again for sure. Your bee post was enlightening.

More than once Freelance Cynic, I overhead parents standing the queues for things threatening their children that if they didn't stop their whinging, the guards would come over and shoot them or take them into custody.

The food was really good Fearless. The pub food was good and a little greasy as expected but tasty as hell and I found myself in some great French, Italian and Indian places as well. Pricey as hell but worth it.

Apparently, they have a much more current form of torture today. They make people read my blog.

I would have like to use them on the German family that was annoying me during my visit to the Crown Jewels.

And I got a tummy ache reading the description of the Scavengers Daughter.

It's a mild form of torture though Chancelucky, the kind you enjoy through the pain.

Did you go back and see them again then CP? After that little moving sidewalk they have you on, you can double back and have another fly by.

That one conjured the worst feeling with me too Barbara. Sorry about the jewels, haha.

Excellent Dale, I didn't get to hit the tourist spots the two times I've been. Thank you!

I'll try and resurrect my photo blog one of these days WP to further regale you. What were you doing there if not touristing?

YAY Photos! Thanks Dale! The Tower is amazing! I want to see it in person some day.

The Tower was mentioned quite a bit in my encyclopedia of execution book. They had some merry old times there. And all of those severed heads placed on pikes on London Bridge!

"What were you doing there if not touristing?"

I was touristing, but doing the stuff related to my age when I passed through. Hitting the t-shirt shops, streets and pubs at nineteen. Hitting Virgin Megastore (then, one of the biggest record stores in the world) on my back through when I was twenty-one.

It was pretty cool Mel, we should hold a blogging convention there and vote who gets tortured and how! :-)

Your encyclopedia of execution Creepy? I don't remember that from your bookshelf photos on your blog. Yikes!

You were doing the right things then WP. You'll have to double back again to hit the other spots now.

Did you tried the torture??

Maybe in an earlier life I did Jill but not on this trip.