Between work and winter, I don't seem to have a prayer but I know who might!
If I ever were to write a book about my sister, I'd call it Letters From A Nun mostly because she's a nun, and she writes letters.
As I'm far too lethargic for such an undertaking, I've done an audio blog instead.  You'll find it over on my sidebar under the Let's Go Audio heading above the GCast player.
Press play, God wants you to. And so does my cat.  Oh, and Sally Field, she always wants it.  Just look at her. 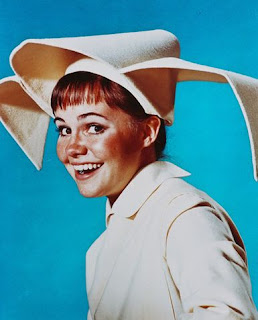 Labels: audio blog, how do you solve a problem like my Sister?, irreverent mother, nunsense, where do they keep the baby graveyard?
Share |

Amazing! The aunt of The Missus is a penguin too, though her specialty is basketball (you can't stop her, you can only hope to contain her).

I see the perfect action film for your sis, that will incorporate an exisiting successful franchise and her calling. Introducting: Villains, put those guns and fists down, or your hands will be smacked with a fully-automatic ruler by- "The Penguin Punisher!"

Thank you for the disclaimer on Grandpa's previous two marriages. I no longer feel the need to send the forensics unit over to dig up his backyard.

Your sister sister really should start a blog. Do they have handwritten ones?

That made my morning, err, afternoon now I guess.

Your sister sounds quite comical and I love she sites Die Hard in her list of favourite movies. I think more excerpts of her letters are in order for future blog posts. :)

Nothing more fun than f*cking with your sister nun's head.

A cloistered nun. I love that. I discerned a contemplative vocation myself. Really.

We see where I ended up.

Anyway, you are a rascal of a man Dale, and with that I say start playing games with the cat names to see what happens.

I can't tell you how much I look forward to your audio posts and this one had all the earmarks of being your finest yet. I could listen to you read the phonebook, provided it was in English and not in French. Radio stations across the continent are looking for someone like you to host the "after midnight show" with some sultry jazz music playing sofly in the background. Should your present job go bust in our recent economic meltdown, look into broadcasting for your next career, and if that isn't your cup of tea, try television. If your most recent photo is accurate, then you should have no trouble finding work hosting a culture segment on your local evening news, as you have that undefinable spark of the "suave everyman who is to be trusted" look that made Clark Gable famous and much sought after.

I'd love to hear your sister's review of the new Indiana Jones movie, should she find the time between chores and wearing out the knees of her habit. I'm certain Christ would approve, as he loves Harrison Ford movies too. Perhaps she could do a guest audio blog if the Mother Superior could see her way clear to let her use the phone once in a while, instead of scribbling out unreadable postcards in her cell instead of copying St. Thomas Aquinas for the thirteenth time.

Just out of curiosity, does your sister wear her hair really short like Julie Andrews? I've always wondered if that was a prerequisite.

Keep up the excellent posts.

"...it essentially means the penguins don't get to leave the exhibit much."

HAHAHAHA...I was taught by penguins, and I wish they'd been cloistered.

Oh, this was good. Thank you.

"Oh, did I mention that hijinks ensue?"

And this was a great story. Yours, not mine. Much funnier to have a sister who's a nun than one who's in, like, middle management.

The problem with these audio posts is that I giggle throughout them but then can't remember all the little gems when it comes time to comment. I guess this makes you the Chinese food of blogging.

I do remember chuckling quite forcefully at the conspiracy theory of second-hand smoke. Although I have to tell you, I love beer-swilling nuns but not smoking ones, so perhaps she and I should never meet.

They're doing a "Sing-Along Sound of Music" showing here in San Diego; perhaps she's like to join me for it?

What happens if it goes Blu-ray, are the rates the same? I'll definitely cut you in Cormac, you're a better idea man than I am.

I wish I'd kept more of her letters Barbara, usually they're funny and quirky but once in a while, they have to be read to be believed. Poor Grampy, I hope they buried him close by but not so close to interfere with any afterlife fun he might want to pursue.

She's totally into the bone crunching violent action movies Allison, I wouldn't cross her, she's surely picked up a few tips here and there.

It's something I do with a small but healthy amount of fear Beth. I do it for you.

Excellent Fran, should I start with "R" names to begin slowly. "My cat Rosie is just hilarious" might go unnoticed and I can go from there.

Doc, how can I respond to a comment like that but to say, the money's in your PayPal account! How nice to hear such positive feedback when like most people, I can't stand the sound of my own recorded voice! Didn't Clark Gable hit and run kill someone once and they covered it up? That might be fun! For the record and I'm not sure if I mentioned it before, the Church I was dragged to all through my young life was "St. Thomas Aquinas"!

She does wear her hair short but that happened before God did I think. Some of them just tuck it all under that habit headgear they all seem to like so much. I'll see if I can get her to do more than her standard 7 out of 10 review for you! Thanks again Doc, you're a prince among men and beers.

I was lucky enough Bubs not to have been locked in the exhibit with any of them in school so congratulations on surviving! Glad you liked the post, maybe if we organize like they do, we can take 'em?

Pistols, I prefer the safety of middle management over hijinks any day plus I don't look good in hats.

With two audio posts, you get egg roll Coaster Punchman! She'd hate to join you for the Sing-A-Long but if you've got beer, you might have a prayer at getting her there! She totally believes cigarette smoke doesn't even smell so how can they say what they say?! She's a gem alright!