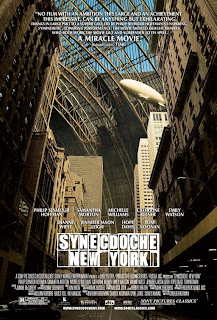 I just finished watching an oddball film courtesy of the mind of Charlie Kaufman: Synecdoche, New York. I can't say that I'd recommend it but I will say it made me laugh in some unexpected places and scratch my head. It had a lot of quirk going for it but not enough to be completely satisfying.
One of my favourite parts was when the priest character had this to say:
Everything is more complicated than you think. You only see a tenth of what is true. There are a million little strings attached to every choice you make; you can destroy your life every time you choose. But maybe you won't know for twenty years. And you'll never ever trace it to its source. And you only get one chance to play it out. Just try and figure out your own divorce.
And they say there is no fate, but there is: it's what you create. Even though the world goes on for eons and eons, you are here for a fraction of a fraction of a second. Most of your time is spent being dead or not yet born. But while alive, you wait in vain, wasting years, for a phone call or a letter or a look from someone or something to make it all right. And it never comes or it seems to but doesn't really.
And so you spend your time in vague regret or vaguer hope for something good to come along. Something to make you feel connected, to make you feel whole, to make you feel loved. And the truth is I'm so angry and the truth is I'm so fucking sad, and the truth is I've been so fucking hurt for so fucking long and for just as long have been pretending I'm OK, just to get along, just for, I don't know why, maybe because no one wants to hear about my misery, because they have their own, and their own is too overwhelming to allow them to listen to or care about mine. Well, fuck everybody. Amen.
While perhaps designed to lead me to the razor's edge, it had quite the opposite effect. It made me smirk and realize how true it is that we all shuffle around when maybe we should be out picking up speed and trying new experiences on for size. You know by speed, I meant the drug right?
Posted by Dale at 12:20 PM

That is one profound homily. I'd love to actually hear one like that. My DIL and grandkids are off to church this morning (I am in Portland). My son and I are home...reading stuff like this.

I double that Amen and raise him two!

That was a good Sunday morning wake-up. Now I feel like buying a lottery ticket and going back to bed.

Is this one of these movies that messes with your head?

I thought it was pretty excellent myself Melly and all the more effective for being delivered by a guy wearing the collar. Amen indeed!

The cast was pretty top notch Red but the story was a bit strange and meandering.

Send me the ticket Bubs, I'll check it for you.

It messes a little bit with your head and all over itself too Gifted Typist.

You could never disappoint me Dale. Well maybe after breaking up with the Korean Bagel Lady, but after a few months I was okay :)

That had more of the razor's edge effect on me. That's one hell of a priest.

Oh Dale, this movie has at once attracted and repelled me. Repelled has continued to win, I just have no energy to do the work of watching it!

I've been meaning to try more drugs. I'm on about four of them right now, though merely prescriptions painkillers. Damn.

The Lady Who Doesn't Lunch: said...

My disposition is way too sunny for this film.

I was overwhelmed with lethargy after watching this film. I guess that was the point. Was there a point?

Just the bit you wrote made me feel terrible... its so brutally honest! Probably true too... but... a bit too tough to swallow. I like my place of residence, head in the sand!

I disappointed myself for that Suze but it just had to be done. Thanks for hanging on.

Sorry about that Creepy. The title of this post was another winning line delivered by Catherine Keener, an all round joyfest this film was.

As long as I don't repel you Fran, I am good. The movie was a downer and slow moving so save yourself the time.

Don't forget to share CP, it's the cornerstone of addiction.

It took me a minute to see through your evil comment Evil Genius and conjure up Andy Kaufman.

Mine is too Lunchy Lady, I watched so you wouldn't have to.

Perhaps because my normal state is lethargy Barb, it energized me more than it should have.

The sand can be warm and cozy Helene, I've no quarrel with that.

Of course everyone's disappointing when you get to know them. That is why I love blogging because I can be more interesting than the dumb white country boy that I truly am.

Sounds like a quirky film I'm going to have to see. Glad to here you had fun on your trip.

Yes, things are more complicated, but I believe often because many people make them/secretly want them~that way. It deflects from the things in life they find 1) boring 2) hard 3) they know they have to change.
Because they are always so "busy" with the complicated things happening...but they cherry pick what they do or actually pay attention to.

I think part of the reason for disappointment is casting what you want the other people to be upon them, then they don't match up or live up to that= disappointment. ~Mary

That's the kind of thing I used to say in church. No wonder they kicked me out. I still think it's true, though.

It's exactly why I hesitate meeting bloggers Doc, I'm the most boring person I know and hate it when people find that out.

Wise words Mary, you're as correct as the truth of the passage I quoted to begin with. Aren't we cheery bunnies?! :-)

Your church is somewhere I'd go Holly because the sermons would be so damned interesting.

That last paragraph with the speed zinger made me laugh!

You may think you're boring, Dale, but I'd still love to meet you. I'm swear I'm going to find you really interesting just to spite you.

I think the Talking Heads said something similar when they sang, "and you may ask yourself, 'well, how did I GET here?'"

And as for the line "Just try and figure out your own divorce," I'm still trying to figger out the FIRST one, and that happened in 1998!!

I pretty much like any movie that Phillip Seymour Hoffman is in...even Happiness, which was very quirky. Just saw Doubt yesterday (I know, I am behind) and was left doubting that I liked it much....but not sure yet.

We'll definitely have to meet Kat so A) I can bask in your brilliance and B) I can watch you try and mask the 'fuck he's boring' look that will creep across your face.

It's all about 'letting the days go by' Cap'n but even then, it can take forever! David Byrne, we need your help.

I like him too and enjoyed Happiness Melly. I saw 'Doubt' a couple of years ago on Broadway and it packed quite a punch. A production is also playing here now. I haven't seen the film yet but will when enough time's gone by. I don't want to erase the performances in my head yet.

I will have to check this out. As for the speed, they won't sell me any more Sudafed at the CVS. I'll have to try that later.

I'm totally pinching parts of this for upcoming blogfodder.

I'll share some of my speed then Del-V, that's just wrong! Or, I could suggest watching the movie on fast forward for a similar sensation.

Pinch as ye may Cap'n.

interesting blog. It would be great if you can provide more details about it. Thanks you

Hey, nice site you have here! Keep up the excellent work!