I did it. I finally did it. Because I know I can trust you, I'll tell you what it is.

Wait, wait. Not the one where you win millions of dollars.

And not the kind in the classic short story by Shirley Jackson.

But one of those lotteries sponsored by a hospital.

You know, all the money goes to a great cause?

No, not one of the cars or houses with property taxes more than my mortgage payment.

A smaller prize. Worth less than the cost of the ticket. 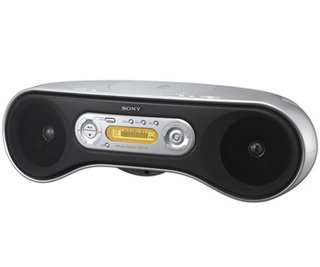 I'd be lying if I didn't say I was a bit disappointed but at least it's not big and yellow.

Once, many years ago, the Sony gods smiled down on me for the first time.

McDonald's was introducing a game (Monopoly I believe) with instant winner tabs on the drinks and french fry packaging.

I peeled a little tab off my fries and shoot, bang, glory hallellujah, I was a winner! A mountain of paperwork and a solemn oath sworn to foster an unhealthy obsession with electronics later and it was all mine.

A so large it could be seen from space brilliant yellow portable Sony Walkman. I was very excited.

That toy served me very well only to be replaced by a newer and sexier model a few years later. For all I know, the original's still whirring away in a landfill somewhere.

To celebrate my good luck, I will listen to Lucky Number by Lene Lovich.
Posted by Dale at 10:28 PM

I never win anything.

i once won my freedom on appeal. it was sweetest win of my life. way better than the free coke i found under the cap.

ps...i would like to thank my attorney for the win. i couldn't have done it without you saul "dirtbag" rosenbergstein.

That Sony looks like something else... I can't quite put my finger on it. Anyway, it's definately not big and yellow!

Reese- Don't feel bad, you are Wonder Woman! And your prize is an invisible plane!

Reese, as Saviour pointed out, you're the grand high winner of the day, come and pick us up would you?

Al -- Don't be over confident, I used Saul once and now I've only got the one good eye. Sleeping with that half open is a bitch.

Saviour, please remove your finger and return your tray table to the upright position. Or Reese will open the invisible hatch and off you go.

Congrats on the contest! The best I've ever been able to swing was a couple of DVD's, so I'm envious of course. Interesting choice of music, I wasn't familiar with the artist, but had heard of the label, because any company with a slogan like 'If it ain't Stiff, it ain't worth a fuck' is cool by me.

Hey Mob - I think I first came across Lene Lovich on a compilation and then heard some of her album and Lucky Number was the 'hit'. Quirky tune. And yep, that slogan has to be one of the best ever.

I'm in the market for an MP3 player. I don't think I'll be as lucky as you and run across a free one, but I shall have one nonetheless. I'm only 5 years behind on this craze!

It's good to get in on a craze late. By this time, there are more options, better prices and fewer buggy things to bug you. Happy listening Andi.

"I'm in the market for an MP3 player. I don't think I'll be as lucky as you and run across a free one"

I'm with Andi, where did you find a lone transient to beat out of this fine solid state? Tell me was it a dirty european backpacker? I hear they are in season.

It wasn't a lone transient coolcat...I had to take on a whole (back)pack of them!