After reading a good review of The Three Burials of Melquiades Estrada over at Big Suck Loser written by Creepy, I thought I'd give the film a look.

Westerns have always interested me whether they're set in the wild west, in space or in the present day as this film is. They're not my favourite genre but I do enjoy a good morality tale and Westerns serve this function very well.

This was Tommy Lee Jones' directorial debut and he stars alongside Barry Pepper, Dwight Yoakam, Julio Cedillo, January Jones, Melissa Leo and Levon Helm. The remarkable thing about the solid performances on display is that everyone's so natural and honest that it doesn't look like anyone's acting.

This is a beautifully shot film filled with loneliness and shaded with some of the darker tones of humanity. In the end, enough redemptive light is shone round to allow for a satisfying conclusion and to allow some of the characters a chance to transcend their lots in life. This is all managed subtly and without a trumpeting score.

The premise of the film is that a Mexican illegal working in Texas named Melquiades Estrada is gunned down. His Gringo friend and co-worker Pete (TLJ) sets about returning Mel's body to his family with the unwilling assistance of the man who shot him to begin with.

Along the way and through the effective use of flashbacks, we learn more about the characters and how they came to be in their current predicaments. The slow pacing of the movie gives the characters and the audience time to think, something that's not generally on offer these days.

I'd recommend the film if you like Tommy Lee Jones, Westerns or if you just like saying Melquiades Estrada.

A few days ago, I was talking with some friends about those wallpaper murals people used to have. I had mentioned a sunset mural that a neighbor had in their kitchen (of all places). In a scene in the film, two of the characters are dancing in front of the same mural I was talking about.

Not very long ago, I titled a post The Night They Drove Old Dixie Down. This was in relation to Dixie Lee fried chicken and a poorly painted sign. I probably had the song title still in my head having recently watched the Martin Scorsese film The Last Waltz starring The Band. In the film, drummer and singer Levon Helm sings that song. He was in The Three Burials of Melquiades Estrada. I suppose saying man he's aged is a bit ridiculous considering the time that's passed. 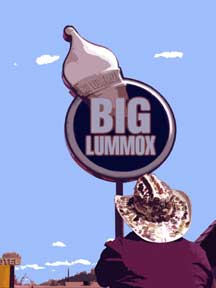 I want to see that movie now, and I don't even like Westerns. :) Do you know if Barry Pepper is Canadian?

My grama used to have an alpine lake mural in her bedroom. I always thought those wallpaper murals were odd. I want the Tuscan Villa one. It will tide me over til we go to Italy. The Dolphin Paradise and Clouds murals are funky too.

Not sure about Dr. Pepper's nationality Lee. I like the fact that you think the murals are odd yet you're ordering one for every room. Won't you have the prettiest trailer in the court?

About that "Big Lummox" sign, is that an ice cream cone or the business end of a receptacle-tipped condom?

Is that you in the hat looking at my personal condom Haahnster. How very dare you.