Snatch The Credit From My Hand Grasshopper 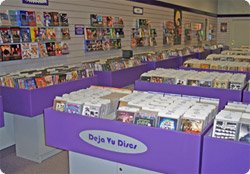 I just got back from Deja Vu Discs again and I'm happy.

I walked in with a bunch of crappy old dvds and cds that didn't seem like they'd be crappy when I bought them out of need and traded them in for cold hard store credit.

They claim to pay more than most of the other used places and I believe them now. I got $183.36 in credit and used that to immediately buy more stuff I *need*.

Who can convince me right now that I don't need the 2 disc special edition dvd of Enter The Dragon? Come on, Bruce Lee was like the brother I never had, you know, one who made chop socky movies and then died too young? Plus of the few times I can remember my Dad taking me to the movies, it was to see Bruce and Chuck Norris kick it out in Return of the Dragon and the other time was for Jaws.

There were some other bargains to be had and so right now I'm listening to some Michelle Shocked and wondering if I'll like Ghost in the Shell if I get to it later.

I love cool autumn Saturdays when there's nothing better to do.
Posted by Dale at 4:19 PM

You mean the stuff we did together for a lark that time? I'd never trade that in Creepy!

(1) You never have to explain or apologize for buying anything featuring Bruce Lee.

Thank you. He's one of those people you couldn't take your eyes off of when he was onscreen.

I've long enjoyed Michelle although I've lost touch with her a bit. I went to see her on her Arkansas Traveller tour and she was just charming and great to listen to.

Oooh.. trading up, I see! How delightful!

Wow, I thought I was one of the few people left with a copy of Arkansas Traveller. I also still play Captain Swing sometimes.

Does every town in every city in North America have a re-sale shop called Deja Vu?

We've been in the same store in Toronho. Sigh...

Trading up, down, left and right Bre!

Loved Capt. Swing and Arkansas Traveller. The one I picked up/replaced was Short Sharp Shocked.

I think I remember hearing something like that Grant.

Who you calling ho, ho? Ho!